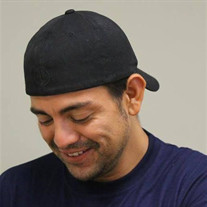 Jose "Adam" Deras, 33, passed away Tuesday, January 10, 2017 in Medicine Lake, Montana. Adam was born October 26, 1983 in Xalapa, Veracruz, Mexico to Jose Cruz and Margarita Landa. His family resides in Carthage. Adam received his bachelors degree in biology, with an emphasis in ecology, from M.S.S.U. in Joplin, Class of 2014. Adam was a Wildlife Refuge Specialist in Medicine Lake, Montana and a volunteer EMT and ambulance driver for Sheridan Memorial Hospital in Plentywood, Montana. He was also a certified master scuba diver, a volunteer fireman and an activist in community service. Adam is survived by his girlfriend, Lynlee Reed, of Bismark, North Dakota, his mother Margarita Landa, his father Jose Cruz, three brothers Edwin Deras, Joseph Deras and Erik Deras and one sister, Abigail Deras, all of Carthage. Services will be held at 10:00 a.m., Friday, January 20, 2017 at the Ulmer Funeral Home Chapel. Visitation will be held from 6:00 p.m. to 8:00 p.m. on Thursday, January 19, 2017 at Ulmer Funeral Home Chapel. Burial will be at Park Cemetery in Carthage, with Wildlife Forestry Service Honors. Online condolences may be made at www.ulmerfh.com . Arrangements are under the direction of Ulmer Funeral Home. Two of Adam's favorite quotes were: “Good timber does not grow with ease. The stronger the wind, the stronger the trees.” Marriott J. Willard “When I’m sad, I stop being sad and be awesome instead. True Story." Barney Stinson

The family of Adam Deras created this Life Tributes page to make it easy to share your memories.