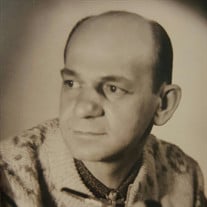 Alexander “Alex” Zobkiw, 94, joined the love of his life in Heaven on February 17, 2017 after a short illness. His devotion and belief in God gave him peace when he crossed over to be with his Lord and Savior. Alex was born to the late Leo and Kelmentyna Zobkiw on March 29, 1922 in Auburn, New York. He had three sisters and five brothers that all preceded him in death. It is believed that he may have actually been born in Ukraine. Alex was very proud of his Ukrainian background and spoke of it often. As he would say, Ukrainian men are loving and generous, such as he. Alex was a devout Catholic and contributed immensely to the Catholic community and started supporting the church from an early age. He joined the Air Force on January 5, 1944, where his love of airplanes began. He later graduated from Michigan State University in 1951 with a degree in engineering. Alex was blessed with a large and loving family. He married the love of his life and best friend, Arvia B. Rider-Zobkiw on December 10, 1958. Alex was blessed to gain a daughter Gloria Brady-Brosam when he married Arvia. Alex was an engineer at heart and an avid golfer for many years. He spent four years building his very own airplane in his garage that was completed in 1982. He worked as a plant engineer for several years and retired with FMC Corporation in Bowling Green, Kentucky. Alex was a kind and soft-spoken man and always had time to answer a question or solve a problem, no matter how small. He is dearly missed by his loved ones, who celebrate the fact that he is at peace with his creator. Alex is survived by his five beautiful granddaughters: Rhonda Hawke-Harrison of Murfreesboro, Tennessee, Christy Cole of Carthage, Missouri, Cindy Brosam, Tammy Krug and Misti Burton, all of Joplin, Missouri. He also has nine great-grandchildren and twelve great-great-grandchildren, along with several nieces and nephews, including great and great-great. He is preceded in death by his loving wife, parents and siblings. The family will receive visitors at Ulmer Funeral Home from 1:00 p.m. to 2:00 p.m., Saturday, February 25th, with the service starting at 2:00 p.m. Following the service will be a graveside farewell at Fullerton Cemetery in Carthage. Condolences may be made at www.ulmerfh.com . Arrangements are under the direction of Ulmer Funeral Home.

Alexander &#8220;Alex&#8221; Zobkiw, 94, joined the love of his life in Heaven on February 17, 2017 after a short illness. His devotion and belief in God gave him peace when he crossed over to be with his Lord and Savior. Alex was born to... View Obituary & Service Information

The family of Alexander "Alex" Zobkiw created this Life Tributes page to make it easy to share your memories.

Alexander “Alex” Zobkiw, 94, joined the love of his life in Heaven...