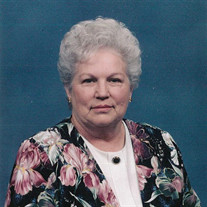 Arnetha “Williams” Dreibelbis, 84, passed away on July 19, 2018 at Mercy Hospital in Joplin, MO. Arnetha was born on January 18, 1934 near Berryville, AR to R.D. and Ruby “Filbeck” Williams. The family moved to rural Carthage in 1941 and Arnetha graduated from Sarcoxie High School in 1951, where she met and fell in love with “Gene” Dreibelbis. They were united in marriage in 1952. Arnetha worked at Ramsey’s Department Store in Carthage, a shirt factory in Pierce City, the election office in Olathe, KS, J.C. Penney in Anderson, IN and various other places during her career. She retired in 1987. Arnetha became a Christian in 1948 and was a member of Emanuel Baptist Church on County Road 110 in Carthage. She later joined the First Baptist Church in Sarcoxie, then joined the First Baptist Church in Carthage. Arnetha is survived by her husband, Hadley Eugene Dreibelbis; four children and their spouses, Linda and Jay Scrivner, Debra and John Duquaine, David and Shana Dreibelbis, Donald and Anna Dreibelbis; 15 grandchildren and 18 great grandchildren; one sister, Faye Sjorlund and husband Ray; one brother, Hershel Williams and wife Nancy. Arnetha was preceded in death by three sisters, Hazel Hudson, Wilma Jean Aubrey and Dorothy Dixon; two brothers, Roland Williams and Donald Williams. Services will be held at 10:00 a.m. Monday, July 23, 2018 at Ulmer Funeral Home. Visitation will be held from 2:00 p.m. to 3:00 p.m. Sunday, July 22, 2018 at Ulmer Funeral Home. Burial will be at Sarcoxie Cemetery in Sarcoxie, MO. Online condolences may be made at www.ulmerfh.com. Arrangements are under the direction of Ulmer Funeral Home.

The family of Arnetha "Williams" Dreibelbis created this Life Tributes page to make it easy to share your memories.