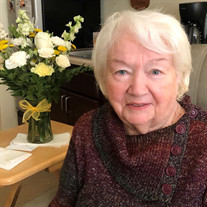 Barbara Jean Clarke, 86, of Lee Summit, Missouri passed away on Thursday, December 2, 2021 at her home in Addington Place. Barbara was born in Scott City, Kansas on December 16, 1934 to Lloyd Callen and Bernice Callen “Cloud”. Barbara was a devout Christian who was blessed with being a part of multiple churches, prayer groups, and bible study groups in which she was very active. She loved to play bridge and really enjoyed reading. Barbara had many friends and had no problem making new ones wherever life took her. She was an inspiration throughout her whole life and was particularly courageous in facing her final days. Barbara was joined in marriage to Robert L. Clarke on September 29, 1956 in Scott City, Kansas; he preceded her in death on April 18, 1992. Barbara is survived by two sons, Robert L. Clarke Jr. of Tecumsah, Oklahoma, and Neal Clarke (Becky) of Edmond, Oklahoma; two daughters, Mary Elizabeth Cayton (Chad) of Carthage, Missouri, and Catherine Banes (Michael) of Lee Summit, Missouri; seven grandchildren, Clarke Cayton, Callen Banes, Katelyn Galaska, Faith Clarke, Hope Clarke, Elizabeth Clarke, and Grace Clarke; and nine great-grandchildren. Along with her husband, Robert L. Clarke, Barbara is preceded in death by her parents Lloyd Callen and Bernice Callen.

The family of Barbara Jean Clarke created this Life Tributes page to make it easy to share your memories.