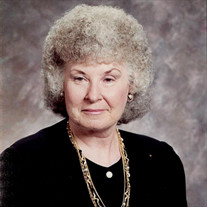 Barbara Jo Jump, 90, of Sarcoxie, Missouri, passed away at her home on Sunday, May 1, 2022. Barbara was born on October 15, 1931 to Clyde T. Dirlam and Esther Francis “Hatch” Dirlam in Glendale, California. Barbara was a long time resident of the area and a member of the West Union Church of Christ. She was a homemaker and had been a den mother for the Cub Scouts of America; which she enjoyed. Barbara was united in marriage to James William Jump on April 21, 1951 in Alhambra, California; he preceded her in death on July 27, 1981. She is survived by her three sons, Jim Jump (Juanita) from Granby, Missouri, Larry Jump (Patricia) from Diamond, Missouri, Glenn Jump from Sarcoxie, Missouri; seven grandchildren; and fifteen great-grandchildren. Barbara is preceded in death by her husband James and her parents, Clyde and Esther Dirlam. A funeral service is scheduled for Barbara at 2:00 PM on Friday, May 6, 2022, at the Ulmer Funeral Home Chapel in Carthage, Missouri. A visitation will be held before the service from 1:00 to 2:00 PM on Friday, May 6, 2022 at the Ulmer Funeral Home Chapel. The burial will be at Diamond Cemetery in Diamond, Missouri following the funeral service. Condolences may be posted online at www.ulmerfh.com. Arrangements are under the care and direction of Ulmer Funeral Home.

The family of Barbara Jo Jump created this Life Tributes page to make it easy to share your memories.

Barbara Jo Jump, 90, of Sarcoxie, Missouri, passed away at her...