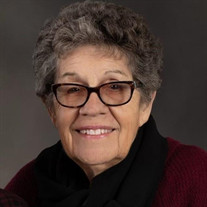 Barbara Charlotte Little, 86, of Reeds, Missouri, passed away peacefully Saturday, January 22, 2022 at Oak Pointe in Carthage. She was born April 18, 1935 in Carthage to Lawrence Fasken and Helena “Schroeter” Fasken. As a young girl she spent a lot of time with her grandparents, then at the age of 11 she moved to Michigan to live with her mother, stepdad, and siblings where she stayed until the end of her junior year. At that time she moved back to the Carthage, Jasper area to live with her dad, stepmom, and siblings. Barbara graduated from Jasper High School in 1953. Following graduation, she and three other young ladies moved to Wichita, Kansas to find jobs. She worked at Beech Aircraft where she was employed as an office clerk for several years. She married Roy Parker Anderson Jr. in December 1955. To that union was born a son, Donald Anderson. She married Donald Little on December 22, 1962. To that union were two daughters, Dee Ann and Susan. They stayed in the Wichita area until 1968, spending that summer in Idaho where Don was in charge of a large construction job. In December of 1968, they bought and moved to the farm east of Avilla, where they spent the remainder of their days. Barbara was a stay-at-home mom until mid-1970’s. She worked for Charleston’s Meat Processing in Rural Carthage for several years. She then took the position of bookkeeper and secretary to the board at Avilla Elementary School from which she retired in 2001. After retiring, Barbara volunteered part-time at the Jasper County Records Office for many years. She and Don did a lot of traveling in that time taking fishing trips with friends to Canada, frequent trips to Michigan and Indiana to visit family, short trips collecting family genealogy, and two summer long road trips to Alaska. Barbara was a prolific gardener, seamstress, and cook. She was a Christian and a member of the Avilla United Methodist Church. She served as treasurer for the church for many years. She participated in Extension Club activities, was active in Avilla PTA, and was project leader and community leader for Avilla and Center Point Chargers 4-H Clubs, she was a “band mama.” She always put her family’s needs ahead of her own, and made sure everyone got to practices, games, 4-H, FFA, and music activities. Barbara was a doting wife, mom, grandma, and great grandma. Even though she and Don moved from the “big city” to the country, they blended right in to the Avilla Community, finding strength and encouragement in family and friends. Barbara was preceded in death by her husband of 56 years, Donald Little; her dad and stepmom Lawrence and Helen Fasken; her mother Helena Folts; a grandson Orin Nichols; two brothers Tom Folts and Ray Fasken; two sisters Marjean Folts Wagner and Sandra Newman; a nephew Scott McWilliams, and two nieces Amanda Fasken and Tracy Fasken Turner. She is survived by her son Donald Anderson of Reeds, Missouri, two daughters Dee Ann (Donald) Nichols of Sarcoxie, Missouri and Susan Smith of Monett, Missouri; three grandsons Derek Dahlman, Zane Anderson, and Chet Nichols; two granddaughters Samantha Nichols and Lauren Rector; and five great-grandchildren. She is also survived by three sisters Sharon (Lloyd) Cooley, Carthage, Joyce (Bill) Etzel, Michigan, and Donna (Chuck) Mannor of Michigan; a brother-in-law Jack (Judy) Little of Texas; three sisters-in-law Grace McCormick, Steelville, Ann (Dale) Wheeler, Marshfield, Jean (John) Young of Marshfield, a cousin Marybeth Denton, Wichita, Kansas, and a multitude of other family and friends. She will be sorely missed by all.

The family of Barbara Charlotte Little created this Life Tributes page to make it easy to share your memories.