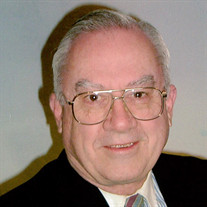 Ben E. Johnson, 81, passed away August 3, 2017 at his home in Carthage. Ben was born November 12, 1935 in Carthage to Elza Johnson and Mayetta “Judd” Johnson. He was a lifetime resident, graduated from Carthage High School Class of 1953, and worked at Eagle Picher for 32 years. After his retirement, he was appointed County Commissioner by Governor Mel Carnahan and worked for O’Reilly Automotive. During Ben’s lifetime, he was very active in his community. He was a member of Rotary, Kiwanis and M.A.K.O. Fly Fishers Club. Ben was a CASA volunteer, a foster parent for 15 years, served on the Carthage City Council 5th Ward, Mayor Pro-Tem of the City of Carthage, liaison to the Powers Museum, the Board of Carthage Public Works, and the Civil War Museum Board. Ben was also instrumental in helping with the Civil War re-enactments and area pow-wows. Ben was united in marriage to Karen Couch on April 2, 1961 in Maple Grove; she survives. Ben is also survived by three sons: Christopher Johnson and Matthew Johnson of Carthage, and Roger Johnson of Joplin, one daughter Melissa Daugherty of Carthage, one brother Thomas Johnson of Americus, Georgia, one sister Alice Hertli of New Harmony, Indiana, 11 grandchildren: Jayme, Wesley, Karrin, Courtney, Afton, Andrew, Kevin, Ashley, Travis, Lakota and Sierra, and several great grandchildren. Ben is preceded in death by his parents and one brother Richard Johnson. Services will be held at 2:00 p.m. Saturday, August 12, 2017 at Ulmer Funeral Home. Visitation will be held from 6:00 p.m. to 7:00 p.m., Friday, August 11, 2017 also at Ulmer Funeral Home. Contributions may be made to Kiwanis Kiddieland or Meals On Wheels, in care of Ulmer Funeral Home. Arrangements are under the direction of Ulmer Funeral Home.

Ben E. Johnson, 81, passed away August 3, 2017 at his home in Carthage. Ben was born November 12, 1935 in Carthage to Elza Johnson and Mayetta &#8220;Judd&#8221; Johnson. He was a lifetime resident, graduated from Carthage High School Class... View Obituary & Service Information

The family of Ben E. Johnson created this Life Tributes page to make it easy to share your memories.