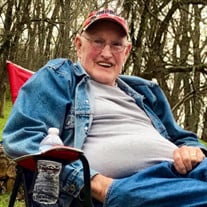 Benjamin Albert Hensley, born December 25, 1948, was a lifetime Carthage resident. He passed away on the morning of July 9, 2019, following a long struggle with cancer. Ben served in the military, and was deployed for one year to The Republic of South Vietnam. He reached the rank of Staff Sergeant, the highest attainable by a draftee, despite only serving for two years, and was decorated with several medals. He was a sharpshooter and strategist with 10/10 vision and the experience of having handled guns all his life. Following active duty, Ben took a job as a wire drawer at the newly opened Leggett and Platt Wire Mill in Carthage, making plans to transform that facility into a world-class establishment. He and his wife Pat (née Dennis) resumed their lives, with three daughters and a son eventually completing their family. Ben retired as Plant Superintendent after working there for 50 years. Ben was an exacting leader, a person of high standards, and he will be remembered proudly and lovingly by his family and his many friends. He loved sharing his knowledge and wisdom about nature and the farm, including the hard work it entails. One of his favorite pastimes was sitting on the front porch with a cup of coffee, watching the world go by. His only marriage, to Pat, lasted 52 years and was ended only by death, as promised. Throughout his life he enjoyed spending time with his children, 7 grandchildren, and 4 great-grandchildren. His children and their spouses are Mrs. Teresa Baker and her husband Jeff, Mrs. Laura Kester and her husband Shane (deceased), Dr. Ben Hensley Jr., and Mrs. Autumn Hulderman and her husband Mike. He was a father and mentor not only to his own children, but countless others. He is also survived by his siblings, Judy, Karl, and Doug Hensley. He has joined his father, Earl, his mother, Marion Keyes, and her husband Cecil, his brothers, Earl Jr. and Tim, as well as three infant siblings in Heaven. Per Ben’s wishes, there are no funeral services planned.

Benjamin Albert Hensley, born December 25, 1948, was a lifetime Carthage resident. He passed away on the morning of July 9, 2019, following a long struggle with cancer. Ben served in the military, and was deployed for one year to The Republic... View Obituary & Service Information

The family of Benjamin Albert Hensley created this Life Tributes page to make it easy to share your memories.