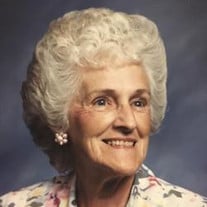 Bessie Lavone Lawless, 94 and a retired LPN of Carthage, Missouri, passed away November 27, 2016. Mrs. Lawless was born on June 22, 1922 to Sam and Viola “Minkler” Storm in Oronogo, Missouri. As a teenager, her family moved to Barton County where she graduated from the Lamar High School Class of 1940. After graduation, she was married to Elmer Ned Lawless on July 27, 1940 in Jasper. Elmer was employed by Standard Oil and later DX Oil Company for many years. Mrs. Lawless always said she never had a job she didn’t like. During W.W.II she was employed as an inspector at the Tent Factory in Lamar. Later, she moved to Kansas City where she worked at North American Aviation as a riveter building B25’s. After the war ended, she worked at Barton County Hospital and Barton County Ambulance Service. For the next 42 years, she was employed by the Lamar Clinic and Dr. Cain. She held membership in the Missouri State Association of LPN’s for 20 years. Her husband of 52 years passed away in 1992. In 1993, she moved to Carthage to be closer to her family. Mrs. Lawless retired in 2000, only to start volunteering at St. Luke’s Nursing Home, the Red Cross and McCune Brooks Hospital. Wherever she was, she was having fun. She loved people, gardening and her many flowers. Mrs. Lawless is survived by one son Gene Lawless of Joplin and one daughter Lois Prier of Carthage, 6 grandchildren, 9 great grandchildren and 3 great-great grandchildren. Preceding her in death was her husband, Elmer, her mother and father, one sister and seven brothers; all of her brothers were enlisted in W.W.II. Mrs. Lawless was a member of the Lamar Methodist Church for fifty years. In 1993, after moving to Carthage, she became a member of the Carthage Methodist Church. Visitation will be held from 6:00 p.m. to 7:00 p.m., Thursday, December 1, 2016 at Ulmer Funeral Home. Funeral services will be held at 2:00 p.m., Friday, December 2, 2016 at the Konantz-Warden Funeral Home in Lamar. Visitation will be held at 1:00 p.m., prior to services at Konantz-Warden Funeral Home. Online condolences can be made at www.ulmerfh.com Contributions may be made to the First United Methodist Church of Carthage in memory of Bessie Lawless in care of Ulmer Funeral Home. Arrangements are under the direction of Ulmer Funeral Home.

The family of Bessie Lavone Lawless created this Life Tributes page to make it easy to share your memories.

Bessie Lavone Lawless, 94 and a retired LPN of Carthage, Missouri,...