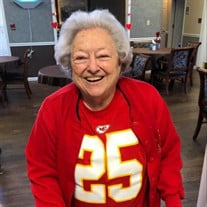 Beverly “Yvonne” Curry, 83, passed away on Thursday, January 7, 2021 at Mercy Hospital in Joplin. Yvonne was born on September 3, 1937 in Neosho to Lyle and Barbara (Chambers) Garrett. She was a longtime resident of Carthage. Prior to her retirement, Yvonne worked as a bookkeeper for Covert Electric and Main Street Auto in Joplin. She was a member of BYKOTA Church in Carthage. Yvonne was a huge Kansas City Chiefs fan and enjoyed bird watching, but her most important love was her grandchildren and great grandchildren. Yvonne is survived by one son, Samuel Curry (Connie) of Carthage; two daughters, Mellonie Fleming (Mike) of Spring Hill, KS and Barbara Curry (Loren) of Carthage; three brothers, Richard Garrett (Janice) of Carl Junction, Gilbert Garrett of St. Joseph and Max Garrett (Janet) of Spring Valley, IL; one sister-in-law, Sibel Garrett; six grandchildren, Mandy Rodriguez (Vince), Meagan Fleming, Kristian Jeffries (Josh), Hannah Cupp (Blake), Hillary Campbell (Patrick) and Hailey Greathouse (Heath); 10 great grandchildren, Adair VanHook, Maura Rodriguez, Michael Rodriguez, Mallory Rodriguez, Camden Campbell, Hattie Campbell, Sam Campbell, Bekham Cupp, Cambree Cupp and Elsie Cupp; along with two foreign exchange students, Helle McClain of Denmark and Agustin Villacis Paz of Ecuador. Yvonne was preceded in death by her parents and two brothers, Leslie Garrett and Dennis Garrett. Visitation will be held from 10:00 a.m. to 11:00 a.m. on Saturday, January 16, 2021 at Ulmer Funeral Home. Services will immediately follow. Burial will be at I00F Cemetery in Neosho. Masks will be required, and the family would like to personally request that you wear any Chiefs clothing you may have in your closet. Contributions in Yvonne's memory may be made to the Cystic Fibrosis Foundation in care of Ulmer Funeral Home. Online condolences may be made at www.ulmerfh.com. Arrangements are under the direction of Ulmer Funeral Home.

Beverly &#8220;Yvonne&#8221; Curry, 83, passed away on Thursday, January 7, 2021 at Mercy Hospital in Joplin. Yvonne was born on September 3, 1937 in Neosho to Lyle and Barbara (Chambers) Garrett. She was a longtime resident of Carthage.... View Obituary & Service Information

The family of Beverly "Yvonne" Curry created this Life Tributes page to make it easy to share your memories.