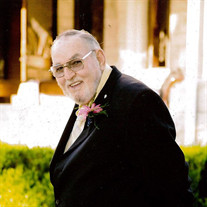 Bill J. Crabtree, 84, passed away Friday, July 20, 2018 at Freeman Hospital in Joplin, MO. Bill was born January 3, 1934 in Davin, West Virginia to Jake and Mary "Blankenship" Crabtree. Bill was a resident of Kansas City, MO for many years, then returned to the Southwest Missouri Area. He has been a resident of Carthage, MO since 2002. Bill served in the United States Army from 1956 to 1958. After his military service, he became an electrical lineman. Bill was a 50-year member of the International Brotherhood of Electrical Workers in the Kansas City Area a Scottish Rite Mason, and a member of the United Methodist Church in Carterville, MO. Bill loved to be outdoors, fishing and hunting whenever possible. Bill was united in marriage to Carolyn “Northup” on September 7, 1982 in Miami, OK; she survives. He is also survived by two step-sons, Joe Naberhaus of Springfield, IL and Kent Offill of Kansas City, MO; two step-daughters, Lisa Ragain of Webb City and Lori Boles of Hillsboro, OR; one brother, Dan Crabtree of Oskaloosa, KS; four sisters, Mescal Spurlock of Independence, MO, Sid Terry of Davin, WV, Linda Greene of Basehor, KS and Wilma Blatt of Huntington, WV; one daughter-in-law, Cheryl Crabtree; 18 grandchildren and 27 great grandchildren. Bill was preceded in death by one son, Billy Crabtree Jr.; one step-son, Barry Duncan; and one grandchild. Visitation will held from 1:00 p.m. to 2:00 p.m., Friday, July 27, 2018 at Ulmer Funeral Home in Carthage, MO. Funeral services will immediately follow. Burial will be at Park Cemetery in Carthage. Contributions may be made to the United Methodist Church in Carterville. Online condolences may be made at www.ulmerfh.com. Arrangements are under the direction of Ulmer Funeral Home.

The family of Bill J. Crabtree created this Life Tributes page to make it easy to share your memories.