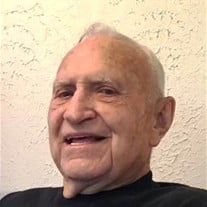 Billy Dean Henson, 86, of Carthage, Missouri passed away Thursday, November 16, 2017 at his home following a lengthy illness. Bill was born June 18, 1931 in Carthage, where he also attended school, to the late O. Elmo and T. Lucille (Spilman) Henson. Bill married the love of his life, Doris Jeanette Wine, on February 4, 1950. She preceded him in death on March 6, 2015. Bill is survived by three daughters, Vicki Henson of Carthage, Marti Henson of Lexington, KY, and Patty Ingram and spouse Paul of Carthage; his grandchildren, Sara (Ingram) Fife and spouse James of Grove, OK, and Ann (Ingram) Myers and spouse Nolan of Carthage; his great-grandchildren, Dalton, Willa, and Taylor Dean Fife, and Casen Myers. Additionally, he is survived by his siblings, Melba Wellsfry of Chico, CA, Eddie and spouse Mary Henson of Sylva, NC, Hershel and spouse Lucille Henson of La Porte, IN, Carol Reed of Carthage, and Linda Blass of Carthage, as well as numerous nieces, nephews, cousins and many dear friends. Bill and his wife were avid travelers, especially to Alaska, Canada, Texas, and Mexico for many years of fishing, scuba diving, barbequing, and camping. They also enjoyed many games of cards, dominos, and pool with family and friends. Bill was part owner of Commercial Glass located in Joplin. He was involved in and held leadership roles in many organizations including Carthage Masonic Lodge No. 197 A.F. & A.M., Meridian Sun Chapter No. 61 of the Abou Ben Adhem Shrine Club and Train Crew, Jasper Commandery No. 31 Knights Templar, Order of the Eastern Star Eminence Chapter No. 93, Carthage Jaycees, and Carpenter’s Local 311. Bill was also a member of the First Baptist Church of Carthage and of Rio Hondo, TX. The Family would like to extend a special thank you to Avalon Hospice of Carthage. Masonic Rites will be held at 6:00 p.m. and visitation will be held from 6:00 p.m. to 8:00 p.m., Monday, November 20, 2017, at Ulmer Funeral Home. Services will be held at 10:00 a.m., Tuesday, November 21, 2017 at Ulmer Funeral Home. Contributions may be made to the Shriner's Hospital for Children, in care of Ulmer Funeral Home. Arrangements are under the direction of Ulmer Funeral Home.

The family of Billy Dean Henson created this Life Tributes page to make it easy to share your memories.