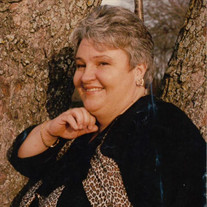 Bobbie Jane Pittman, 68, of Joplin, Missouri passed away on Wednesday, February 9, 2022. Bobbie was born on August 14, 1953 to Max McLaughlin and Nora Jane “Johnson” McLaughlin in Trenton, Missouri. She was a long time Carthage resident. Bobbie was a homemaker, a member of First Church of the Nazarene in Carthage, and a former member of the Carthage Saddle Club. She was united in marriage to Donnie Pittman on March 5, 1972 in Trenton, Missouri; he preceded her in death on September 21, 2011. Bobbie is survived by her daughters Jeanna Brown and husband Larry Brown of Joplin, and Gale Steeves of Sarcoxie, six grandchildren, Samantha Steeves, Maxine Steeves, Lane Brown, Dakota Brown, Ethan Brown, and Michael Brown; and three great-grandchildren Susan, Jason, and Jaxon. She is preceded in death by her parents Max and Nora McLaughlin, and her husband, Donnie Pitman. A memorial service for Bobbie has been scheduled for 9:30 AM on Saturday, February 12, 2022 at Ulmer Funeral Home Chapel. Online condolences may be made at www.ulmerfh.com. Arrangements are under the direction of Ulmer Funeral Home.

The family of Bobbie Jane Pittman created this Life Tributes page to make it easy to share your memories.

Bobbie Jane Pittman, 68, of Joplin, Missouri passed away on Wednesday,...