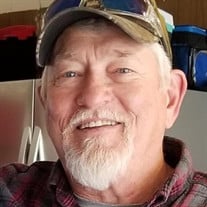 Bobbie Dale Stark, 70, of Carthage, Missouri passed away on Friday, August, 13, 2021 at Mercy Hospital in Joplin, Missouri. Bobbie was born on September 7, 1950 to Elvie Stark and Gloria “Lasiter” Stark in Carthage, Missouri. His mom, Gloria passed away when Bobbie was just a baby and his father remarried Henrietta Stark and they raised Bobbie together. Bobbie worked in construction and he was also a truck driver. He was a member of the VFW Post 2590 Mens Auxilluary, he loved to fish, and he was a great carpenter. He enjoyed building bird houses and whatever project his loving wife, Sue, had in mind. Bobbie was joined in marriage by Susan Hettinger on July 4, 1987 in Carthage, Missouri; she survives. Along with his wife Sue Stark, Bobbie is survived by six sons Steven Stark, Jason Hettinger (Lindsey), Joseph Hettinger (Buffy), Scotty Hettinger (Barbara), Brian Stark (Lynn), and Wes Stark (Amanda); a daughter Juli Minor (Charlie); one brother John Stark; two sisters Jodie Mitchell, and Gloria Nidifer; 23 grandchildren; and 18 great- grandchildren. A service is scheduled at 10:00 a.m. on Monday, August 23, 2021 at Carterville Christian Church. Any contributions may be made to Charlie 22 Outdoors Ministry in care of Ulmer Funeral Home. Online condolences may be made at www.ulmerfh.com. Arrangements are under the direction of Ulmer Funeral Home.

The family of Bobbie Dale Stark created this Life Tributes page to make it easy to share your memories.

Bobbie Dale Stark, 70, of Carthage, Missouri passed away on Friday,...