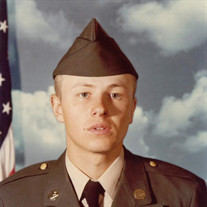 Bobby Joe Stanley, 61, of Carthage, Missouri, passed away on Thursday, February 10, 2022 at his home. Bobby was born November 9, 1960 in Santa Cruz, California, to Bobby H. Stanley and Joanne Charlotte “Coy” Stanley. Bobby was a resident of Carthage for the last 25 years and was employed with Carthage Butterball. He proudly served his country for 13 years in the U.S. Army from 1979 to 1992. Bobby was united in marriage to Peggy Sue Stanley on April 19, 1979 in Neosho, Missouri. Bobby is survived by two daughters, Lori Goodwin and husband Travis of Greenfield MO and Stacy Browder of Carthage; two sons Kyle Joseph Stanley and Daniel Alexander Stanley of Carthage; His father and mother Bobby H. Stanley and Joanne Charlotte Stanley of Sarcoxie, and two brothers David Stanley and Rodney Stanley; and seven grandkids. Taylor,Allen,Nicholas,Alex,Emma,Lexie and River. He is preceded in death by his wife Peggy Stanley., August 7,2021. Funeral service for Bobby will be at 10:00 AM on Thursday, February 17, 2022 at the Ulmer Funeral Home Chapel. A visitation will be held from 6:00 to 7:00 PM on Wednesday, February 16, 2022. at Ulmer Funeral Home. Contributions may be made to the Bobby Joe Stanley Memorial Fund in care of Ulmer Funeral Home.

The family of Bobby Joe Stanley created this Life Tributes page to make it easy to share your memories.

Bobby Joe Stanley, 61, of Carthage, Missouri, passed away on...