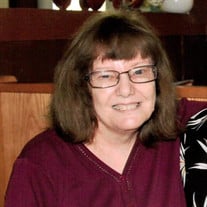 Brenda Louise “Sour” Holt, 67, passed away Thursday, August 20, 2020 at her home in Mt. Vernon, MO. Brenda was born November 15, 1952 in Joplin, MO to Darrell E. and Barbara “Huddleston” Sour. She was a homemaker, a longtime resident of Mt. Vernon, but lived in Carl Junction prior to her move, and a member of the Jehovah Witness Church. She was baptized June 23, 1973. Brenda was united in marriage to Louis Holt on March 17, 1969 in Reddings Mill, MO; he survives. Brenda is also survived by one son, Christopher Holt (Jammie) of Mt. Vernon; one daughter, Jennifer Vaughn (David) of Findlay, OH; four grandchildren, Amanda Holt, Thomas Holt, James Vaughn and Nicholas Vaughn; two sisters, Angelia Sour DeWitt (Bob) of Rogers, AR and Elaina Sour Soper (John) of Gravette, AR. Brenda was preceded in death by her parents; one brother, Darrell Keith Sour; and one sister Cindy Sour Kerr. Graveside services will be held at 2:00 p.m. Friday, August 28, 2020 at Park Cemetery. Online condolences may be made at www.ulmerfh.com. Arrangements are under the direction of Ulmer Funeral Home.

The family of Brenda Louise Holt created this Life Tributes page to make it easy to share your memories.