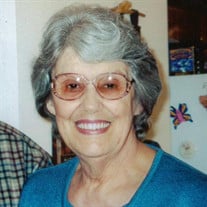 Carolyn Crabtree, 85, passed away at St. Luke’s Nursing Home Tuesday, October 29, 2019. Carolyn was born August 14, 1934 in Carthage, Missouri to Harold and Lucille “Conklin” Northup. She was a longtime Kansas City resident and returned to Carthage in 2002. She worked for the United States Post Office and was a member of the First United Methodist Church of Carterville where she served as treasurer. She enjoyed square dancing, traveling in the R.V. and cross stitching. Carolyn was united in marriage to Billy Jean Crabtree September 7, 1982 in Miami Oklahoma; he preceded her in death July 20, 2018. Carolyn is survived by two daughters, Lori Boles of Hillsboro, OR and Lisa Ragain of Webb City, MO; two sons, Joe Naberhaus of Orlando, FL and Kent Offill of Kansas City, MO; two brothers, Chuck Northup of Tontitown, AR and Phil Northup of Carl Junction, MO. Carolyn is preceded in death by one son, Barry Duncan and one step-son, Billy Crabtree Jr. Services will be held at 11:00 a.m. Monday, November 4, 2019 at Ulmer Funeral Home. Visitation will be held from 10:00 a.m. to 11:00 a.m. Monday, November 4. 2019 prior to the service at Ulmer Funeral Home. Burial will be at Park Cemetery. Contributions may be made to the First United Methodist Church of Carterville in care of Ulmer Funeral Home. Online condolences may be made at www.ulmerfh.com. Arrangements are under the direction of Ulmer Funeral Home.

The family of Carolyn Crabtree created this Life Tributes page to make it easy to share your memories.