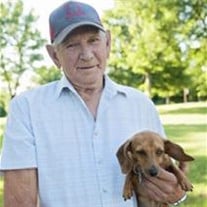 Charley Will Vandergrift, 76, of Alba, MO, entered his Heavenly home on December 29, 2018 surrounded by his family. Charley was born on October 15, 1942 at home to Claude and Ruby Vandergrift. His mother asked his father to fill out the birth certificate with the name of Charles William Vandergrift. When the birth certificate came, it was in the name of Charley Will Vandergrift. Charley was one of eight children. He is survived by four sisters, Alice Reese and Shirley (Melvin) Owens of Mt. Vernon, Rosie Hoffman of Brazelton, GA and Daisy Garner of Miller; one brother, Ralph (Jake) Vandergrift of Miller; and a host of nieces and nephews. Charley was united in marriage to Delores Ann Hastings on August 21, 1964 in Mt. Vernon, MO at the home of his sister, Shirley. They celebrated 54 years of marriage this year. Through good times and not so good times Charley has always been there for his family. Charley always knew he was in trouble when he heard Delores call “Charley Will". Charley is survived by his wife, Delores of the home; four daughters, Vicki Arner (Danny) of Sarcoxie, Mary Beauchamp (Mike) of Alba, Susan Thorn (Morgan) of LaRussell, Missy Pietz (Ryan) of Webb City; one son, Andrew Vandergrift (Rebecca) Alba; six grandsons, six granddaughters and fourteen great grandchildren. He is also survived by his beloved pups, Annie and Ginger. Charley was proceeded in death by his parents and his brothers, Dewey and Willis. Charley worked as a machinist for Steadley’s in Carthage until January of 1998, retiring after 33 years. He would have been retired 21 years the 5th of January of 2019. Charley truly never retired until he became ill this year. He said he “loved his job but it didn’t pay much”. He always kept the home and farm well groomed. He would have two or three gardens going every summer and would share the abundance with family and friends. There was always time for a break when his best friend, Gary Jarmin, would come by and pick him and Annie up for a coffee break at Quaker Mill. He kept the campfires burning (even in the rain) when the family would gather to camp at Ride For Life, Ride For Kids and weekends at the lake. His passing will leave a large hole in our lives but we know that he is in Heaven watching over each and every one of us. Visitation will be held from 6:00 p.m. to 7:00 p.m. Thursday, January 3, 2019 at Ulmer Funeral Home. Funeral services will be held at 2:00 p.m. Friday, January 4, 2019 at First Christian Church in Carthage. Burial will be at Goss Cemetery near Phelps, MO. Memorial contributions may be made to the Carthage or Joplin Humane Society in care of Ulmer Funeral Home. Online condolences may be made at www.ulmerfh.com. Arrangements are under the direction of Ulmer Funeral Home.

Charley Will Vandergrift, 76, of Alba, MO, entered his Heavenly home on December 29, 2018 surrounded by his family. Charley was born on October 15, 1942 at home to Claude and Ruby Vandergrift. His mother asked his father to fill out the birth... View Obituary & Service Information

The family of Charley Will Vandergrift created this Life Tributes page to make it easy to share your memories.

Charley Will Vandergrift, 76, of Alba, MO, entered his Heavenly...