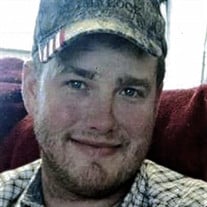 Cody Michael Weatherman, age 30, passed away Monday, May 27, 2019 in his hotel room in Pennsylvania while working over the road earning a living and doing what he loved. Cody was born August 1, 1988 in Springfield, MO to his parents Tim and Michele. He was raised in Aurora, MO where he graduated high school in 2007. He excelled in basketball and football and was eventually recruited to play football at Graceland University in Lemoni, IA. He later moved back to the four-states and engaged in several job opportunities that eventually led to a career as a tank insulator, which he really enjoyed. He is survived in death by his parents Tim and Crystal Weatherman and Shawn and Michele Killion, siblings Tanner Weatherman, Sarah Abernathy, Emily Killion, Connor Killion, Jordan Montgomery, Logan Montgomery, Chelsea Montgomery and a loving family of grandparents, aunts, uncles, cousins, nieces and nephews. He is preceded in death by his grandmother, Annette Moore; cousin, Amber Hilberling; two uncles Curtis and Matt Weatherman. His most treasured moments growing up were hanging out with his cousins, love for his nieces and nephews whom he adored, talking to his best friend and brother, and eating a home cooked meal. His favorite TV show was Jeopardy and always wanted to challenge anyone for bragging rights, which demonstrated his passion for knowledge. He also loved traveling and being outdoors in nature and was always up for going to the creek, listening to music, and having a bonfire or cookout with friends and family. Cody's true colors would shine in his magnetic personality that would affect everyone upon entering the room. It could be said he had a real knack for being an entertainer and having the uncanny ability of knowing how to be so darn funny at the most opportune time. In addition, all will agree that he had an intense playful ornery side that made him a real pro at teasing siblings, cousins and whoever might be near at the moment. The extent of his plots to affect the outcome of your day knew no bounds. From the moment he was born, it was clear that Cody was different. The sweetness of his demeanor and gentleness of spirit would spill easily from his personality. The smiles he offered and hugs he would give were world class. You see, he had another talent that was extraordinary…which was knowing what you needed. His heart was so big and he would always be there to help in any way he could to pour his love into you. But while Cody knew what you needed, he did not know what was needed in his own life and always questioned the world and his existence in it. Being a possessor of such immeasurable sensitivity, also made him susceptible to the pain of this world. Carrying a huge weight on his big shoulders, he never wanted anyone to know he was hurting or to be a burden. But on the inside he was very disappointed with himself and felt like he was letting everyone down. There is no way to sugar coat it. Cody tried to bare his tribulation alone and lost his battle with addiction. For half his life, he tried to grow into the man he desperately wanted to be. We couldn't understand it because our goal was to regain the Cody we remembered. But our fight was nowhere near the war he fought every day to stay clean and battle his own demons. To us, he will always be that person who tried to be all things to all people. A son, a brother, a nephew, a cousin, a best friend. He was a gift to us precious and sweet and we will miss him beyond measure. This is a common theme for families across the world. This is happening to real and genuinely good people and it is our prayer from our family to yours who are battling addiction to read this and find motivation to seek help…the help they truly deserve before "falling off". If Cody ever doubted his importance in this world, perhaps his purpose now is to inspire those who have an addiction to reach out and know you are not alone. There is hope and it lies in the grace and mercy of our Lord Jesus Christ. We pray you find just that. A memorial service will be held for Cody at 2:00 Sunday, June 2, 2019 at Forest Park Baptist Church in Carthage.

Cody Michael Weatherman, age 30, passed away Monday, May 27, 2019 in his hotel room in Pennsylvania while working over the road earning a living and doing what he loved. Cody was born August 1, 1988 in Springfield, MO to his parents Tim and... View Obituary & Service Information

The family of Cody Michael Weatherman created this Life Tributes page to make it easy to share your memories.