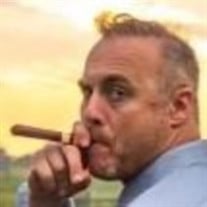 Cory Nathaniel Wright, 40, passed away Saturday, December 11, 2021 in Joplin, Missouri. Cory was born September 28, 1981 in Joplin, Missouri to Mark Wright and Janet Saylor. He was raised in Carl Junction, Missouri. Cory served his country for six years in the United States Air Force. He was a private contractor overseas, an entrepreneur, and an artist. Cory trained hard and loved video games and art. He was also a very spiritual person. Cory is survived by his parents, Mark and Janet Wright of Joplin, Missouri; one brother, Nathan Wright and his girlfriend, Missy Thomas, and her daughter, Riley Thomas; one niece, Micah Wright (Nathan’s daughter); cousins, Jacob Wright, his wife, Becky and son, Zaide, Holly Stump and her husband, Jason and son, Landon, Dana Meadows and his wife, Fabitha, and Dustin Meadows (Crusty Dusty); and several other family members and friends all over the world. A Celebration of Life for Cory will be held at 12:00 p.m., Saturday, December 18, 2021 at Three Points Church in Carthage, Missouri. Bon Fire, Beer and Food at Cory’s parents’ house (2079 South Central City Road, Joplin, Missouri 64804) from 5:00 p.m. to close. Online condolences may be made at www.ulmerfh.com. Arrangements are under the direction of Ulmer Funeral Home.

The family of Cory Nathaniel Wright created this Life Tributes page to make it easy to share your memories.