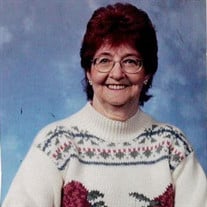 Daisy B. Hendrix, 86, passed away Saturday, December 12, 2020 at Mercy Hospital in Joplin. Daisy was born October 28, 1934 in Woodland, CA to James W. and Rose M. (Chamberlain) Bigham. She was a nurses’ aide for Oxford Health Care. She also worked at McDonald’s for eight years before retiring. Daisy was a member of the Grand Avenue Church of God and has been an area resident since 1990. In her free time, she loved to sew. Daisy was united in marriage to Carroll Hendrix on April 2, 1954 in Vallejo, CA; he preceded her in death on February 13, 2001. Daisy is survived by one son, Daryl Hendrix and wife Darlene of Joplin; one daughter, Melody Ryan of Battle Creek, MI; four grandchildren, Paul Stevenson of Miami, OK, Jeff Stevenson and Aaron Stevenson of Joplin, and Brandon Hendrix of Kalamazoo, MI; one great granddaughter, Scarlet Hendrix of Kalamazoo, MI; one sister, Vera Johnson of American Canyon, CA. Daisy was preceded in death by her parents and two brothers, Kenneth Bigham and Melvin Bigham. Funeral Services will be held at 2:00 p.m. Wednesday, December 16, 2020 at Ulmer Funeral Home. Online condolences may be made at www.ulmerfh.com. Arrangements are under the direction of Ulmer Funeral Home.

The family of Daisy B. Hendrix created this Life Tributes page to make it easy to share your memories.