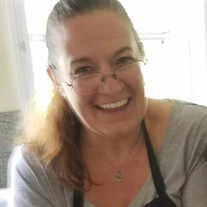 Dana George, 54, of Carthage, Missouri, passed away on Thursday, March 3, 2022, in Mercy Hospital Carthage. Dana was born on June 3, 1967, in Columbia, Missouri. She was raised in Higginsville, Missouri then attended Ozark Christian College starting in 1985. She lived in the Atlanta Metro area from ’96 to ’99, and in ’99 she moved to Ohio. She resided in the Atlanta Metro area once again for about 16 years and was actively involved at Calvary Chapel of McDonough, Georgia, before moving to Carthage, Missouri. Dana was a part of the Praise team at Fairview Christian Church. She loved her family and she loved to spoil her husband, Bob. She worked as a para-professional at the Carthage Intermediate Center for the Carthage R-9 School District. She loved her students and her fellow teachers and was passionate about her job. She was on her way to being a certified teacher. Dana was joined in marriage to Bob George on December 18, 1987 at the Carthage Church of the Nazarene; he survives. Along with her husband, Bob, Dana is survived by one son Aaron George of Atlanta, Georgia; one daughter Morgan George of Atlanta, Georgia; one granddaughter Dannilee; her mother Lila Young of Higginsville, Missouri; three brothers Doug Gibson, Derry Gibson, and Denton Gibson; one sister Dawn Battieger; and numerous nieces and nephews. She is preceded in death by her father, Robert Gibson. A memorial service will be held for Dana George at 1:00 p.m. Tuesday, March 8, 2022 at the Fairview Christian Church in Carthage, Missouri. Family asks that any contributions be made to Pregnancy Resource Center in Henry County, Georgia in care of Ulmer Funeral Home. Online condolences may be made at www.ulmerfh.com. Arrangements are under the direction of Ulmer Funeral Home.

The family of Dana George created this Life Tributes page to make it easy to share your memories.

Dana George, 54, of Carthage, Missouri, passed away on Thursday,...