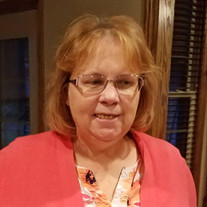 Dana Lee Spring, 60, passed away at her home in Carthage, Missouri, December 31, 2017. Dana was born August 2, 1957 in Inglewood, California to Dan Fitzpatrick and Diana Lee “Mullard” Fitzpatrick. Dana returned to Carthage two years ago from Edmond, Oklahoma; she worked for Mercy Hospital of Joplin and was a member of Christ Church of Oronogo. Dana was in the United States Air Force and was an avid quilter. Dana was united in marriage to Tim Spring October 25, 2008 in Guthrie, Oklahoma; he survives. Dana is survived by her mother and husband; one son, Rob Fitzpatrick and wife Laura of Brandon, South Dakota; five grandchildren: Daniel, Alee, Greyson, Jason and Bennett; three great grandchildren: Niko, Bentley and Lincoln; one brother, Bob Fitzpatrick of Carthage, and one sister-in-law, Kris Fitzpatrick of Temecula, California. Dana is preceded in death by one daughter, Krista Lee Douglas, December 10, 2014, her father, and one brother, Don Fitzpatrick. Services will be held 2:00 p.m. Thursday, January 4, 2018 at Ulmer Funeral home. Visitation will be held from 6:00 p.m. to 7:00 p.m. Wednesday, January 3, 2018 at Ulmer Funeral Home. Burial will be at Park Cemetery. Condolences may be made at www.ulmerfh.com. Arrangements are under the direction of Ulmer Funeral Home.

The family of Dana Lee Spring created this Life Tributes page to make it easy to share your memories.

Dana Lee Spring, 60, passed away at her home in Carthage, Missouri,...