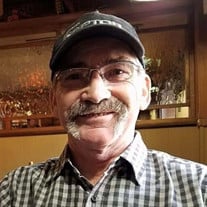 David W. McCall, 59, passed away Friday, November 2, 2018 at his home in Carthage. David was born April 23, 1959 in Phoenix, AZ, to Raymond Utah and Alice “Nichols” McCall. David was a resident of Carthage most of his life, growing up in the Oronogo/Webb City Area. David worked at Schreiber Foods in the maintenance department for several years. He enjoyed hunting and fishing and was an old car enthusiast. David was united in marriage to Karen Nicholas on August 27, 2000 in Carthage, MO; she survives. Additional survivors include his mother, Alice Holden of Bellevue, NE; two daughters, Camille Garrett of Bentonville, AR and Emily McCall of Carthage; two sisters, Kay Harlow (Rolland) of Bellevue, NE and Cindy McCall (Cecil) of Blanchard, OK; five grandchildren, Caden, Colbin, Peyton, Chloe and Caylin. David was preceded in death by his father and one grandson, Paxton. Visitation will be held from 6:00 p.m. to 7:00 p.m. on Tuesday, November 6, 2018 at Ulmer Funeral Home. Memorial services will be held at 2:00 p.m. Wednesday, November 7, 2018 at the Ulmer Funeral Home Chapel. Online condolences may be made at www.ulmerfh.com Arrangements are under the direction of Ulmer Funeral Home, Carthage, MO.

The family of David W. McCall created this Life Tributes page to make it easy to share your memories.