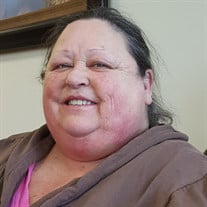 Della S. Neel, 63, passed away November 6, 2018 at Freeman West Hospital in Joplin. Della was born January 1, 1955 in Carthage to Clarence and Thelma “Keller” Smith. Della was a lifetime resident of Carthage. She worked at Fred’s Frozen Foods, Leggett & Platt, Big Smith and the former Fair Acres. Della was a member of World Outreach Covenant in Carthage and enjoyed her grandkids so much, she was well known for spoiling them. Della is survived by one son, William Hood and wife Lacey of Carthage; one daughter, Shelly Neel of Carthage; two sisters, Nancy Brooks and Lorene Hendricks, both of Carthage; nine grandchildren, Tylar, Trevor, Camara. Hailey, Amiee, Matthew, Eli, Austin and Derrick. Della was preceded in death by one daughter, Christy Weess, on September 14, 2015. A visitation will be held from 6:00 p.m. to 8:00 p.m. Thursday, November 8, 2018 at Ulmer Funeral Home. Online condolences may be made at www.ulmerfh.com. Arrangements are under the direction of Ulmer Funeral Home.

The family of Della S. Neel created this Life Tributes page to make it easy to share your memories.