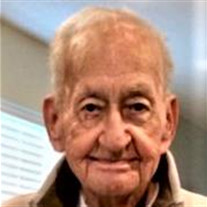 Denny B. Boatright, 83, passed away April 24, 2018. Denny was born August 14, 1934 in Joplin, MO to Burton and Frances V. “Hill” Boatright. Denny graduated from Joplin High School Class of 1952 and served in the United States Army as a sargent, after which he returned to the Carthage Area to raise his family. He worked for the Vickers Corporation for 35 years and retired from Vickers. Denny very active in his community and was a member of the Carthage Masonic Lodge and other Masonic Associations, such as Knights Templar, Royal Arch Mason, Abou Ben Adhem Shrine, York Rite, Scottish Rite and the Blue Lodge. He also served as a chairman for the Maple Leaf Festival in 1976 and was a member of the Grace Episcopal Church of Carthage. Denny was united in marriage to Jeannette Wilks; she preceded him in death. Denny is survived by one daughter, Jan Wiggins (John) of Rolla; one son, Anthony Boatright (Karen) of Webb City; one brother, Thomas Michael Boatright (Karen) of Springfield; three grandchildren, Christi Gideon (Chad), Cory Boatright (Charissa), David Boatright (Jennifer); four great grandchildren, Paisly, Addison, Zara and McKenzie. Denny was preceded in death by his parents, his wife, one sister, Shirley, in infancy, and one sister, Barbara Johnson. Memorial services will be held at 2:00 p.m. Saturday, May 5, 2018 at Hackney Cemetery, Northeast of Carthage. Contributions may be made to the Shriners Children’s Hospital in care of Ulmer Funeral Home. Online condolences may be made at www.ulmerfh.com. Arrangements are under the direction of Ulmer Funeral Home.

The family of Denny B. Boatright created this Life Tributes page to make it easy to share your memories.