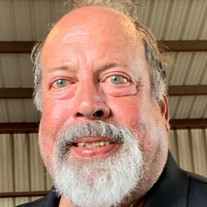 “The Master” has retired to the big corn field in the sky! Our buddy, pal and good friend Don Knost passed away August 29, 2020, at Freeman Hospital, Joplin, MO. Don was born September 2, 1959, in Carthage, Missouri, to Gary S. and Melba “Adkins” Knost. Don was a life-long Carthage resident. He attended Carthage schools and graduated in 1977 from Carthage High School. He was highly involved in band where he played the trombone. Don was a leader in Key Club and Math Club. He continued his education at Missouri Southern until he left to help take care of the family business. Don was a life- long farmer, businessman and skilled draftsman. He loved fishing and pheasant hunting with his family and friends. He enjoyed cooking and always tweaking everyone’s recipes. Don was an accomplished country western dancer and poker player. His impact on others reaches far and wide. Don mentored many people throughout his life who worked for him at Orbit Products and Knost Farms. Don was also very involved with ArtCentral for many years and was a member of First Christian Church most of his life. Don is survived by his wife, Susan, and her children, Jamie McCoy (Levi), Jim Bob Steen (Ashleigh) and Jessica Steen (Justin); four grandchildren, Trapper James McCoy, Jasper June McCoy, Robert Bear Steen, and expected grandson, Olus K. Geisinger. He is also survived by his sister, Debbie Sanders (Tobie); one nephew, Stephen La Follette; three step-nieces, Molly, Becky and Ameila Sanders; two uncles, Ron Knost (Glenda), and Flavious Adkins (Evelyn); two aunts, Nadine Hansen and Ann Adkins; several cousins; Don’s in-laws, Percy R. Turner (Lynn) and Helen Turner; and one brother-in-law, Tim Turner (Judy). He was preceded in death by his parents and his brother, David Allen Knost. A celebration of this farmer’s life will be held with a weenie roast at his beloved Spring River on Knost Farms on Friday, September 18th at 4:00 p.m. Please bring a side dish or dessert, chairs, and wonderful memories. Signs directing to the river will be posted starting at 222 North River Street in Carthage. In lieu of flowers, memorial contributions may be made to Carthage FFA, 2600 South River St., Carthage, MO or the Jasper County Youth Fair, P.O. Box 1061, Carthage, Mo. 64836.

The family of Don Knost created this Life Tributes page to make it easy to share your memories.

“The Master” has retired to the big corn field in the sky! Our...