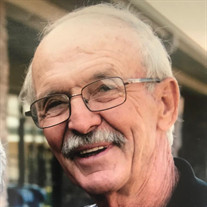 Don Howard Quade, 81, passed away Monday, January 24, 2022 in Carthage, Missouri. Don was born July 27, 1940 in Barton County, Missouri to Benjamin “Ben” Franklin Quade and Rosa Beerly. Don was farmer at heart. He farmed in the Carthage area (rural route #1) for thirty years and then moved to Nicholasville, Kentucky for approximately seven years. Don returned to the Golden City area for about thirteen years. He then retired and moved into town, Carthage, Missouri. Don owned and operated Datalek Incorporated with his daughter, Teresa Ford, in Kentucky, then managed MFA Grain Elevator in Lockwood, Missouri and Jasper Grain Incorporated in Jasper, Missouri. Don eventually began farming with Jerry Schnelle at Schnelle Farms. He loved to golf and play pool. Don was on the board of directors for the MFA State Board, a 4H leader, softball coach, a member of the Young Farmers and the Saddle Club. Don was a member of First Christian Church in Carthage, Missouri, and had also been attending Christ Church of Oronogo in Oronogo, Missouri. Don was united in marriage to Lawanda Good on July 3, 1960 in Carthage, Missouri; she survives. Don is survived by his wife, Lawanda; a son, Jeff Quade and his wife, Kelli, of Carthage, Missouri; two daughters, Teresa Ford and her husband, Chip, of Nicholasville, Kentucky and Sara Cox and her husband, Kyle, of Joplin, Missouri; one sister, Alene Scott of Golden City, Missouri; five grandchildren, Hannah Hickey, Meredith Ford, Grasyn Cox, Kylyn Cox, and Cole Quade; and one great grandchild, Hudson Hickey. Don is preceded in death by his parents, Ben and Rosa Quade, and three brothers, Art Quade, Leonard Quade, and Ben Lee Quade. A graveside service will be held 2:00 p.m., Friday, January 28, 2022 at Fasken Cemetery in Carthage, Missouri. Visitation will be from 12:00 p.m. to 1:30 p.m. Friday, January 28, 2022 at the Ulmer Funeral Home prior to services. Contributions may be made to Peterson Outdoor Ministries in care of Ulmer Funeral Home. Online condolences may be made at www.ulmerfh.com. Arrangements are under the direction of Ulmer Funeral Home.

The family of Don Howard Quade created this Life Tributes page to make it easy to share your memories.