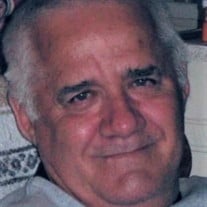 Donald “Don” Eugene Clark, 81, of Grove, OK went to be with his Lord and Savior on Friday, March 27th, 2020. Don was born July 23, 1938 in Neck City, MO to Vernon E. and Juanita “Lipe” Clark. Don graduated from Webb City High School in 1955. He was very proud of the fact that he never missed one day of school in all 12 years, and he made sure his grandkids knew it. Don met the love of his life, Jacquie Harrison in 1961. They were happily married for 58 years. Shortly after they were married, Don was drafted into the United States Army, serving two years in Germany and six years in the Army Reserves. Don spent his working years at the Chevrolet dealership in Carthage, MO. Additionally, he co-owned Central Service Center in Carthage with his brother-in-law, Gary Harrison. He also worked for Grove City Hall until he retired in 2005. Don was a member of the Sarcoxie Nazarene Church and served on the church board. Don had a passion for street rod cars. He spent a lot of his time working on classic collectors and was a member of Vintage Rods of Joplin. Don was adored by many. He had the most humble, humorous spirit and loved to make people laugh. He will be deeply missed by his family and friends. Don is preceded in death by his parents; two sisters, Sharon Belk and Shirley Kirk; one daughter, Tammy Frazier and son-in-law Dean Hartronft; and two nephews. Don is survived by his wife, Jacquie Clark of the home in Grove; one daughter, Jennifer Fieker and husband Steve of Sarcoxie; two granddaughters, Krissy Benson and husband Mike of Grove and Jessica Fieker of Sarcoxie; one grandson, Danial Fieker of Springfield; two great granddaughters, Alexia Benson and Lana Benson of Grove; brother-in-law and sister-in-law, Gary and Bonita Harrison, along with many nieces, nephews and cousins. He is also survived by his beloved cat, “Tiny”. Graveside memorial visitation will be held 10:00 a.m. Monday, April 6, 2020 at Park Cemetery in Carthage. Services will immediately follow at 10:30 a.m. with full military honors. In lieu of flowers, memorial contributions may be made to the local Humane Society. Online condolences may be made at www.ulmerfh.com. Arrangements are under the direction of Ulmer Funeral Home.

The family of Donald Eugene Clark created this Life Tributes page to make it easy to share your memories.