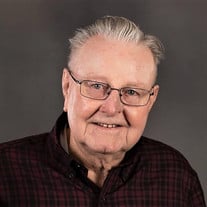 Donald Laverne Little, 84, of Reeds, MO passed from this life on Wednesday, July 24, 2019 surrounded by his family, following a short illness. He was born April 28, 1935 in Webster County Missouri to Andrew Jackson Little and Gladys Leon (Parscale) Little and was the fifth of 13 children. He graduated from Conway High School in 1953. He was a carpenter by trade and joined the Carpenter’s Union in 1962. He received his 50-year recognition in 2012. Don was a member of the Avilla United Methodist Church and was a founding member of their men’s prayer breakfast. Don also served on the Avilla School Board. He enjoyed his life, raising cattle, growing fescue seed, travelling, fishing, hunting, gardening, music, telling stories of his childhood and family history. Most of all, he loved his wife, family and his Savior. On December 22, 1962, Don married Barbara Fasken Anderson. They lived in the Wichita, Kansas area until December 1968 when they moved to their current home east of Avilla; Barbara survives. Don is survived by three children, Donald Anderson (Emma) of Reeds, Dee Ann Nichols (Donald) of Sarcoxie, and Susan Smith of Monett; eight grandchildren, Derek Dahlman of Ft. Wayne IN, Zane Anderson of Ft. Wayne IN, Samantha Nichols of Sarcoxie, Chet Nichols of Sarcoxie, Lauren Rector of Springfield, Roberto Ayala of Rogers, AR, Rene Ayala of Rogers, AR and Brian Ayala of Carthage; and eleven great grandchildren. He is also survived by five siblings, Jack Little (Judy) of Lockhart, TX, Leona Copeland Wiley of Marshfield, MO, Grace McCormick of Steelville, MO, Ann Wheeler (Dale) of Marshfield, MO and Jean Young (John) of Marshfield, MO, along with a host of other family and friends. Don was preceded in death by his parents; six brothers, J.D. Little, Howard Little, Perry Little, Glen Little, Wayne Little and Robert Little; one sister, Mary Foley; and one grandson, Orin Nichols. Services will be held 10:00 a.m. Tuesday, July 30, 2019 at Ulmer Funeral Home. Visitation will be held from 6:00 p.m. to 7:00 p.m. Monday, July 29, 2019 at Ulmer Funeral Home. Burial will be at Fasken Cemetery. Contributions can be made to the Team Boys Ranch in care of Ulmer Funeral Home. Online condolences can be made to www.ulmerfh.com. Arrangements are under the direction of Ulmer Funeral Home.

The family of Donald Laverne Little created this Life Tributes page to make it easy to share your memories.

Donald Laverne Little, 84, of Reeds, MO passed from this life...