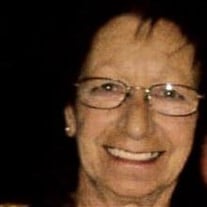 Donalda A. Belford, 77, passed away April 16, 2018 at Mercy Hospital in Joplin. Donalda was born February 15, 1941 in Pawtucket, RI to Edward and Urbana Delores “Ferrera” Palumbo. She formerly resided in California, but moved to Carthage in 1997 to be near her grandchildren. Donalda was a homemaker and worked at the Naval Base in Miramar, CA. Donalda was the first born of nine children. She had five children of her own and 11 grandchildren. Being a kid at heart, she loved being around her children, grandchildren, nieces and nephews. She helped raise many of them over the years. She was a kind woman and a free spirit who enjoyed traveling, fishing and getting lost in a good book. Donalda is survived by two sons, Albert O’Neill of Joplin and David O’Neill of Sarcoxie; three daughters, Jodie Lewis (Steven Spitz) of Carthage, Kathy Bayer of Sarcoxie and Barbara Cookson (Brian) of Parkville, MO; three brothers, Joseph Palumbo, Peter Palumbo and Paul Palumbo; three sisters, Doreen Palumbo, Dianne Kocher and Deborah Hernandez; 11 grandchildren, Andrew, Dustin, Timothy, Jacob, Steven, Sean, Jessica, Rebecca, Alexandria, Andrew and Cameron; and three great grandchildren. Donalda was preceded in death by her parents; one brother, Lewis Palumbo; one sister, Dale Palumbo, and one grandchild, Elaina. Her body has been taken for cremation. A private family memorial service will follow at a later date. Arrangements are under the direction of Ulmer Funeral Home.

Donalda A. Belford, 77, passed away April 16, 2018 at Mercy Hospital in Joplin. Donalda was born February 15, 1941 in Pawtucket, RI to Edward and Urbana Delores &#8220;Ferrera&#8221; Palumbo. She formerly resided in California, but moved to... View Obituary & Service Information

The family of Donalda A. Belford created this Life Tributes page to make it easy to share your memories.