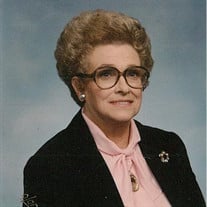 Doris G. Hubbard, 93, passed away Sunday, February 25, 2018 at St. Luke’s Nursing Home in Carthage. Doris was born January 7, 1925 in Seymour, MO to William E. and Nellie Jane “Wingo” Barker. She was an active and devoted member of the First Baptist Church in Carthage, Den Mother of the Cub Scouts and served as a Red Cross Gray Lady. Doris was united in marriage to Carl E. Hubbard on September 3, 1944 in Arkansas; he preceded her in death July 4, 1980. Doris is survived by one son, Steve Hubbard of Ardmore, OK; four grandchildren, Shannon, Brent, Dusty and Autumn. Doris is preceded in death by one daughter, Carla LeMasters in 2005; two brothers, Roy and Ray; five sisters, Thelma, Edna, Elsie, Carrie and Vonna. Graveside services will be held at 2:00 p.m. Thursday, March 1, 2018 at Park Cemetery in Carthage. Visitation will be held from 5:00 p.m. to 6:00 p.m. Wednesday, February 28, 2018 at Ulmer Funeral Home. Online condolences may be made at www.ulmerfh.com. Arrangements are under the direction of Ulmer Funeral Home.

The family of Doris G. Hubbard created this Life Tributes page to make it easy to share your memories.