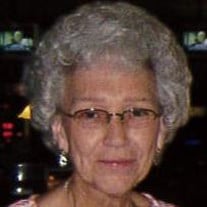 Dorothy “Dottie” Mae Frost passed away Friday, January 5, 2018 at her home in Carthage. Dottie was born February 23, 1936 in Carthage to Elmer and Mary “Rose” LeMasters and was a lifetime resident of Carthage. Dottie was a bus driver for the Carthage R-9 School District and was a cook at the Jr. High School and High School. Dottie was a member of the Mt. Moriah United Methodist Church and taught Sunday school. She served as a Girl Scout Leader and a Band Mom for several years. Dottie was also a Worthy Matron Eastern Star, Grand Royal Matron-Amaranth, served in the White Shrine and Social Order of the Beauchaunt. Dottie was united in marriage to Marvin Frost August 10, 1958 at Mt. Moriah United Methodist Church; he survives. Dottie is also survived by one son, Randy Frost (Sharon) of Carthage; one daughter, Jan Johnson of Carthage, one brother, Lloyd LeMasters (Angie) of Oronogo; one sister, Virginia Honey of Oronogo; five grandchildren: Peter Frost, Kelsey Frost, Jennifer Nord, Steven Juris and Amber Lombard; ten great grandchildren: Elijah, Hailey, Jazzi, Kaimen, Kassius, Russell, Kastiel, Harrison, Tucker and Ireland. Dottie is preceded in death by her parents and one brother, Roger LeMasters. Services will be held at 2:00 p.m. Monday, January 8, 2018 at Ulmer Funeral Home. Visitation will be from 2:00 p.m. to 3:00 p.m. Sunday, January 7, 2018 at Ulmer Funeral Home. Burial will be at Paradise Cemetery in Jasper. Contributions may be made to Mt. Moriah United Methodist Church care of Ulmer Funeral Home. Online condolences may be made at www.ulmerfh.com. Arrangements are under the direction of Ulmer Funeral Home.

The family of Dorothy Mae Frost created this Life Tributes page to make it easy to share your memories.