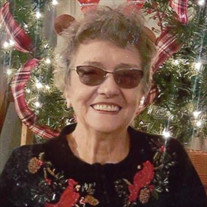 Dorothy Jean “Dilworth” White, 87, of Carthage, Missouri, passed away on Wednesday, January 26, 2022, at Oak Pointe of Carthage. Dorothy was born on October 13, 1934, to James Henry Dilworth and Stella May Irene “Stockton” Dilworth in Wentworth, Missouri. She was a longtime resident of Jasper County, Missouri and a Sarcoxie High School graduate. She worked as a line cook for Sirloin Stockade in Carthage before retiring. She liked to bake and had a great talent for decorating cakes. She enjoyed crocheting and all her grandchildren got baby blankets that she made for each one with love. She really liked to sew, going to church, and was very competitive when she played games. She especially loved spending time with her family and her grandchildren. Dorothy was joined in marriage to Richard Dean White on May 7, 1954, in Wichita, Kansas; he preceded her in death on March 14, 2009. She is survived by four sons, Michael Dean White (Lue), Danny Lee White (Sharon), Gene Alan White, and Paul Thomas White (Christy); one daughter, Connie Elaine White; 17 grandchildren; 24 great-grandchildren; and three great-great grandchildren. She was preceded in death by her parents, Jim and Stella Dilworth; two brothers, James Charles Dilworth and Jack Lee Dilworth; and one sister, Marjorie Ann Marshall. A funeral service is scheduled for Dorothy on Thursday, February 3, 2022, at 2:00 pm at the Ulmer Funeral Home Chapel. A visitation will be held before the funeral from 1:00 to 2:00 p.m. on Thursday, February 3, 2022. The burial will be at Sarcoxie Cemetery in Sarcoxie, Missouri following the funeral service. Online condolences may be made at www.ulmerfh.com. Any contributions may be made to The Carthage Humane Society in care of Ulmer Funeral Home. Arrangements are under the direction of Ulmer Funeral Home.

The family of Dorothy J White created this Life Tributes page to make it easy to share your memories.