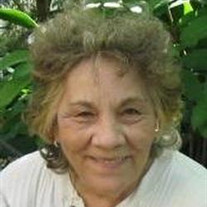 Dottie J. Farmer, 76, passed away December 13, 2016. Dottie was born on March 3, 1940 to George and Irene Lawson in Greenfield, Missouri. Dottie managed several convenience stores and restaurants in the Lamar and Carthage areas. She also owned and operated the Whippoorwill Café in the Boston, Missouri Community for several years, beginning in 1999. Dottie was united in marriage to Darrell L. Farmer on October 6, 1956 in Cedar County, Missouri. He preceded her in death on July 12, 1996. Dottie was the family matriarch, always putting friends and family before herself. Family was her everything. Dottie is survived by one son, Terry Farmer of Chicago, Illinois, one daughter, Teresa McNaught of Liberal, Missouri, one brother, Jerry Lawson of Joplin, Missouri, two grandsons, Justin Lair and Colin McNaught and one great granddaughter, Payton Lair. Dottie is preceded in death by two brothers, Frankie Lawson and Gerry Lawson, and one sister, Carolyn Silvers. At last, she can now have that long-awaited Heavenly reunion with her husband, parents and family. Graveside services will be at 10:00 a.m., Saturday, December 17, 2016 at the Memory Gardens Cemetery in Lamar. Anyone wanting to join the procession should meet at Ulmer Funeral Home at 9:15 a.m.. The Family will receive friends from 6:00 p.m. to 7:00 p.m., Friday, December 16th at 2445 West Oak St. in Carthage. Contributions may be made to Oakton Methodist Church in care of Ulmer Funeral Home.

The family of Dottie J. Farmer created this Life Tributes page to make it easy to share your memories.