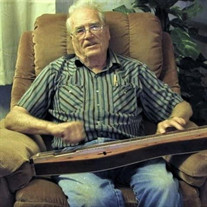 Duane Gordon Strand was born February 21, 1928 to Henry and Agnes Strand in their farmhouse near Langford, SD. He departed this life on October 26, 2017 in the home of his daughter, a farmhouse near Avilla, MO. Duane was joined in marriage to Anna Marie Hanson on November 11, 1951; together they raised 4 children and enjoyed a large extended family. After marriage, Duane and Anna lived 15 years in Aberdeen, SD where Duane advanced to press foreman at the newspaper. Duane enjoyed hunting and fishing in the hills of NE SD. Then, for six years in California, Duane worked as shop foreman for AD Strand Excavating, which employed 7 of the 9 Strand brothers. In 1973, Duane and Anna bought Roykota Resort on Roy Lake, SD. They worked side by side there for 22 years improving the resort, adding a restaurant and making an 80 acre pasture into a 9-hole golf course and creating a wonderful vacation destination. After retiring, they continued living on Roy Lake for 8 years, spending winters in their RV in Texas. During this time, Duane’s lifelong love of music and working creatively with his hands meshed to give him a 4th career as he began playing and crafting many stringed instruments and other woodwork, which he continued to do until the day the stroke that took his life. The next six years were spent back in Langford until they moved to Missouri in 2008 to be near their youngest two daughters. As Anna’s health deteriorated, Duane became her chief caregiver, tending her and loving her until her passing in 2014. Duane is survived by son Mike (Sharon), daughters Brenda Hall (Rod), Kristi Whitmore (Greg) and Lori Bergman (Randy), 16 grandchildren and 44 great-grandchildren, brothers Arden, Robert, Hank, Orman, Earl, Verlo and Roger, sister Donna Wegleitner, and numerous nieces, nephews and friends. He is preceded in death by his beloved wife Anna, his parents, brother Dorville, sister Mavis Johnson, an infant grandchild and several great grandchildren. Memorial services will be held at 3:00 Saturday, October 28, 2017 at Harvest Community Church in Avilla, Missouri. Contributions may be made to the church, care of Ulmer Funeral Home. Arrangements are under the direction of Ulmer Funeral Home.

Duane Gordon Strand was born February 21, 1928 to Henry and Agnes Strand in their farmhouse near Langford, SD. He departed this life on October 26, 2017 in the home of his daughter, a farmhouse near Avilla, MO. Duane was joined in marriage... View Obituary & Service Information

The family of Duane Gordon Strand created this Life Tributes page to make it easy to share your memories.