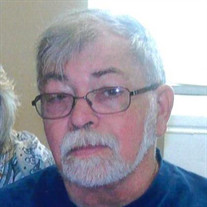 Earl “Eugene” Crook, 65, passed away in Salina, Kansas October 16, 2020. Eugene was born June 19, 1955 in Salina. Eugene was a security guard and worked for Midwest Security in Salina. Eugene was united in marriage to Patricia “Corker” Crook; she preceded him in death in 1987 in Salina. Eugene is survived by the love of his life, Marilyn Augustine; they had 32 years together. Eugene is also survived by two daughters, Christa Sears of Momence, IL and Jolissa Crook of Salina, KS; three sons, Jeromy Crook of Eldorado, KS, Derek Augustine and Wesley Augustine both of Salina, KS; one sister, Marcia “Crook” Grundy (Dub) of Carthage, MO; nine grandchildren and three great grandchildren. Eugene is preceded in death by his parents, Harry E Crook and Wanda M. Williams; step-Dad, Cleaton “Babe” Williams of Carthage; paternal grandparents, Rudolph and Emma Crook of Salina; maternal grandparents, Earl and Viola Jordan of Oronogo, MO. Graveside services will be held at 2:00 p.m. Friday, October 23, 2020 at Park Cemetery. Visitation will be held from 12:30 p.m. to 1:30 p.m. on Friday October 23, 2020 at Ulmer Funeral Home. Contributions may be made to the American Heart Association or the American Diabetes Association in care of Ulmer Funeral Home. Online condolences may be made at www.ulmerfh.com. Arrangements are under the direction of Ulmer Funeral Home.

The family of Earl "Eugene" Crook created this Life Tributes page to make it easy to share your memories.