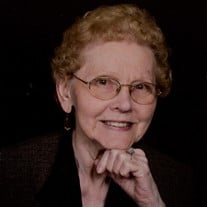 Edith Mae (Favinger) Downey passed away peacefully to be with the Lord Saturday, July 7, 2018 at St. Luke’s in Carthage, MO. Edith was born June 20, 1927 in Jasper, MO to Allen and Canova (Spielman) Favinger. Edith was raised on a farm and went to school in the Blue Community of Jasper, MO. As a young child, Edith contracted scarlet fever and nearly died. She never forgot the pain and agony that disease caused her and her family and praised God for her total recovery. Her family also endured the complete devastation of their farm home by fire and reminisced about all the neighbors who came and tried to help put the fire out and salvage belongings. Edith treasured her memories of those Blue Community days, the lifelong friends she made and the farm where she and her family lived and worked. Tilling the fields behind her beloved mules, Pete and Buck, and having the birds come down and swirl around her head as she worked brought her happiness for her entire life. When Edith was a teenager, her family relocated to Carthage, MO. She graduated from Carthage High School in 1946. Following graduation, Edith worked at the Carthage Creamery. Edith was united in marriage to L.J. “Jay” Downey on November 5, 1948. They moved to Anaheim, CA, in 1949 and resided there until they returned to Carthage in 1967. To this 63-year-old union were born two daughters who survive along with their spouses: Margaret and Gary Richardson of Springfield, MO, and Deborah and Tom Swarens of Camdenton, MO. Edith is also survived by her sister, Martha Ann Tillock of Carthage; four granddaughters and their spouses: Sara and Wesley Hall, Emily Jenkins, Miriam and Donnie Minter, Lynne and Alan McGhee; nine great-grandchildren: Xander Holman, Chloe and Liam Jenkins, Warner and Augustine Hall, Jediah and LJ Paul Minter, Gavin and Kylie McGhee; one step-great grandson, Donnie Minter Jr.; sisters-in-law, Phyllis Downey Hamilton and Mary Downey; along with many nieces, nephews, cousins and friends. Special friends of late were Paula Richardson, Kelly Borchgardt, Sausha Miller and Dale Dintaman. Edith was preceded in death by her parents and her husband. After many years as a devoted wife, mother and homemaker, Edith returned to the work force as a sales clerk at Ramsey’s on the Carthage Square, then as a dental and office assistant for Dr. Jack Robbins. In her spare time, she enjoyed sewing, quilting and helping her husband restore their Main Street home. Edith was also involved in activities outside of the home. She was a member of First Christian Church in Carthage and helped organize funeral dinners for many years. She was also a member of the American Legion Auxiliary and the Ozark Trails Studebaker Club where she served as Historian for many years. In addition, she helped lead a Campfire Girls Troup, volunteered for organizations like the Parents and Teachers Association and the American Red Cross and worked local elections. Funeral arrangements are under the direction of Ulmer Funeral Home, with Ministers David Cook and Ed Hamilton officiating. Visitation will be held at Ulmer Funeral Home on Tuesday, July 10th, from 6:00 p.m. to 7:00 p.m. Services will be held at the First Christian Church on Wednesday, July 11th, at 10:00 a.m., with burial to follow at Paradise Cemetery in Jasper. The family would like to extend special thanks for their mother’s care to retired Dr. Richard Williams, Dr. Chad Wagoner, Meals on Wheels, St. Luke’s North, and Hospice Compassus. In lieu of flowers, the family requests donations be made to either First Christian Church Hospital Equipment Ministry or the Carthage Senior Center Meals on Wheels. Online condolences can be made at www.ulmerfh.com.

Edith Mae (Favinger) Downey passed away peacefully to be with the Lord Saturday, July 7, 2018 at St. Luke&#8217;s in Carthage, MO. Edith was born June 20, 1927 in Jasper, MO to Allen and Canova (Spielman) Favinger. Edith was raised on a... View Obituary & Service Information

The family of Edith Mae Downey created this Life Tributes page to make it easy to share your memories.

Edith Mae (Favinger) Downey passed away peacefully to be with...