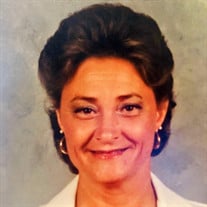 Elgin “Vonnie” Yvonne Probert, 76, passed away Wednesday, December 9, 2020 at her home in Carthage surrounded by her family. Vonnie was born January 23, 1944 to Rebert and Elgin Bernice "Ellis" Brooks and was a longtime resident of Carthage. Her work life included several years as a beautician at Cut & Curl in Carthage and Tiffany’s Restaurant in Precious Moments. Vonnie’s play life included arts and crafts, decorating and baking. She was an avid bowler and softball enthusiast, playing softball well into her 40’s. She also coached youth softball for years. Vonnie was united in marriage to Dale Probert on November 2, 1964 in Miami, OK. They were married for 56 years. He survives. Vonnie is also survived by one son, Wes Probert (Corine) of Carthage; two daughters, Cindy Williams and Janet Crowe (Derek), both of Carthage; one sister, Hazel Melton of Leland, MS; eight grandchildren, Amber, Blake, Megan, Hailey, Karley, Katie, Presley and Raven; four great grandchildren, Bradon, Kaydence, Brooklyn and Luna Rae. Vonnie was preceded in death by her parents; one brother, George Brooks; two sisters, Betty Jo Pickle and Clara Ann Brooks. Visitation will be held from 6:00 p.m. to 7:00 p.m. on Monday, December 14, 2020 at Ulmer Funeral Home. Services will be held at 10:30 a.m. on Tuesday, December 15, 2020 at Carthage Nazarene Church, 2000 Grand Avenue. Online condolences may be made at www.ulmerfh.com. Arrangements are under the direction of Ulmer Funeral Home. ATTENTION: THE SERVICES FOR VONNIE PROBERT HAVE BEEN CANCELLED DUE AN IMMEDIATE FAMILY EMERGENCY. THE PROBERT FAMILY WISHES TO HAVE A CELEBRATION OF LIFE SERVICE AT A LATER DATE.

Elgin &#8220;Vonnie&#8221; Yvonne Probert, 76, passed away Wednesday, December 9, 2020 at her home in Carthage surrounded by her family. Vonnie was born January 23, 1944 to Rebert and Elgin Bernice "Ellis" Brooks and was a longtime resident... View Obituary & Service Information

The family of Elgin "Vonnie" Probert created this Life Tributes page to make it easy to share your memories.