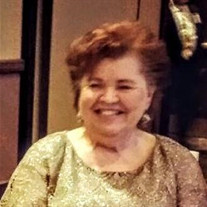 Emma (Arlene) Shankles, 72, passed away April 10, 2018 in Joplin, Missouri. Arlene was born February 26, 1946 in Miami, Oklahoma to Clarence and Ruby Scott. One of four children, Arlene grew up in Kansas City, Missouri and later married and moved to Overland Park, Kansas where she spent the next 20 years raising her three children and three step-children until she divorced in 1986 and moved to Lamar, Missouri. Arlene met Bobby L. Shankles in 1987 and they married on July 2, 1988. Her family grew by seven additional step-children that day. They lived their life together in various small towns, but stayed in the general southwest Missouri area. Bobby and Arlene had been married 17 years when he passed away July 26, 2005. Arlene loved camping and fishing, as well as playing cards and bingo. She was very social and loved to go out with her friends and enjoyed large family get-togethers. Arlene is survived by one daughter, Robbin Kuse of Carl Junction, Missouri; two sons, Stephen Fortman of Oklahoma and Larry Kuse Jr. of San Diego, California; seven step-children, Sharron and Jody Newby, Elisabeth Thrift, Bobby Shankles, Ray and Brenda Shankles, Laura Shankles, Janet Stonis and James Shankles; one brother, Ric Scott of Grand Junction, Colorado; and many, many grandchildren, great-grandchildren, nieces, nephews and cousins. Emma is preceded in death not only by her husband, Bobby Shankles, and parents Clarence and Ruby Scott, but also one sister, Betty Harris of Portland, Oregon and one brother, Jim Scott of Kansas City, Missouri. Memorial services will be held at the family’s residence Saturday, April 14, 2018.

Emma (Arlene) Shankles, 72, passed away April 10, 2018 in Joplin, Missouri. Arlene was born February 26, 1946 in Miami, Oklahoma to Clarence and Ruby Scott. One of four children, Arlene grew up in Kansas City, Missouri and later married and... View Obituary & Service Information

The family of Emma Arlene Shankles created this Life Tributes page to make it easy to share your memories.