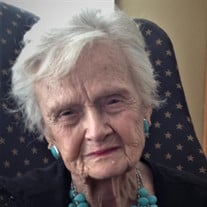 Emogene “Gene” Kiser (nee Grove) passed away July 26, 2017, at the age of 94. She was married to her late and beloved George R. (Lawson) Kiser for 70 years. She was the daughter of the late Everett Grove and Caledonia (McGregor) Grove. Gene was born in Ryan, Oklahoma on May 17, 1923 and remained a strong Oakie all of her life even though she also lived in Texas and Missouri. She was raised in the Beam Community near Ryan, Oklahoma. Her last private home was in Carthage, Missouri; she passed away in Park Place Senior Living at Winghaven in O’Fallon, Missouri. She is survived by her beloved sister Betty Cherry. She was the dear mother of Sandra (Robert) James, Judy (Jack) Reynolds and Greg (Pam) Kiser, the loving grandmother of Ashley (Christa) James, Kathleen (Rick) Hall, Brandon James, Callie (Archer) Heibel, Jason (Teresa) Reynolds, Aaron (Marta) Kiser, Kate (Ben) Ragsdale and Zach (Jamie Claire) Kiser. And, she was the proud great grandmother of 14: Josh, Luke, Haley, Samantha, Madeline, Kellen, Math, Aidan, Miles, Tate, Rylan, Owen, Hayes, and Louise, and one great-great grandchild, Logan. In her later years, Gene enjoyed water aerobics, oil painting, the Shakespeare Book Club, and playing Mexican Train. Gene was a Daughter of the American Revolution. For many years she and Lawson taught children and adult Sunday school. They served many years in the First Baptist Church of Webb City, Missouri, the Nichols Hills Baptist Church of Oklahoma City and the First Baptist Church of Carthage, Missouri. Gene was a great cook and she could really lay on a big, delicious dinner, especially with her Lawson helping every step of the way. A private family graveside service will be held at 2:30 p.m. Saturday, July 29, 2017 in Mount Hope Cemetery. Afterwards, a Celebration of Life will be held at 4:00 p.m. in the serving hall of the First Baptist Church of Carthage. Memorial contributions may be made in Emogene’s name to the Salvation Army, Carthage Crisis Center or Gideons International. No flowers, please. Arrangements are under the direction of Ulmer Funeral Home.

The family of Emogene "Gene" Kiser created this Life Tributes page to make it easy to share your memories.