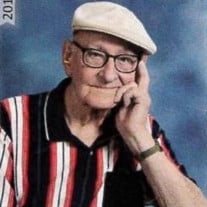 Floyd Ray Stiles, 96, passed away on December 2, 2020 at his Carthage home following a brief illness. Floyd was born February 5, 1924 to Warren and Alice (Townley) Stiles. He was raised in Dudenville, MO, before marrying Betty Woods on June 10, 1944 for a marriage that lasted 63 years. He fought in Europe during World War II and earned the Bronze Star and Purple Heart for his United States Army service. Floyd worked at Ideal Construction and M&P Construction before retiring in 1995. After retirement he and his wife were founding members of the Joplin Chapter of Habitat for Humanity. He enjoyed spending time with family and friends. Over the years, he became a master woodworker, avid gardener and loved watching his backyard birds. Floyd and Betty also loved traveling as members of the Holiday Rambler RV club, visiting many locations in the U.S. and Canada. Floyd is survived by his two daughters, Kathleen Strait and Cynthia Richmond, both of Carthage; one son, Rick Stiles and wife Rita of Joplin. As proud family man, he was blessed with eight grandchildren, seven great grandchildren, and nine great-great grandchildren. He held a strong faith in Christ and was a member of the First United Methodist Church of Carthage for over 50 years, serving on the Administrative Board and Trustees through the years and sharing his carpentry gifts. Floyd was preceded in death by his wife, Betty Stiles, grandson, Roger Strait, sons-in-law Richard Strait and Donald Richmond, sister Edith Clyman, and brothers Wayne Stiles, Donald Lee Stiles and Harold Stiles. Grandsons and great grandsons will serve as pallbearers. Graveside services will be held at 10:00 a.m. Saturday, December 5, 2020 at Park Cemetery in Carthage. Floyd will be laid to rest with full military honors. A drop-in visitation will be held from 10:00 a.m. to 6:00 p.m. on Friday, December 4th at Ulmer Funeral Home. In lieu of flowers, memorial gifts may be made to Habitat for Humanity, Integrity Hospice or the First United Methodist Church Carthage. Online condolences may be made at www.ulmerfh.com. Arrangements are under the direction of Ulmer Funeral Home.

Floyd Ray Stiles, 96, passed away on December 2, 2020 at his Carthage home following a brief illness. Floyd was born February 5, 1924 to Warren and Alice (Townley) Stiles. He was raised in Dudenville, MO, before marrying Betty Woods on... View Obituary & Service Information

The family of Floyd Ray Stiles created this Life Tributes page to make it easy to share your memories.