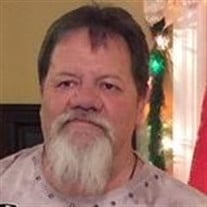 Gary Joseph Pieschel, Sr., 59, passed away January 12, 2018 at his home in Carthage, Missouri. Gary was born January 15, 1958 in St. Louis, Missouri to William E. and Dorothy L. “Harnes” Pieschel and graduated from Marshall County High School in 1976. Gary moved to Southwest Missouri in 1980 from Lewisburg, Tennessee. He worked at Juvenile Shoe Company and Ameri-Cold. He coached and participated in Carthage Little League and Carthage Youth Football. Gary was a member of St. Anne’s Catholic Church for the 29 years. Gary was united in marriage to Cynthia Marie “Clark” on October 24, 1980 in Miami, Oklahoma; she survives. Gary is also survived by one son, Gary Pieschel, Jr. and one daughter, Brandi Pieschel, both of Carthage; one brother, Benny Clark, of Granby; two sisters, Karen Wells and husband Robert of Petersburg, Tennessee, Michelle Straw of Sarcoxie, Missouri; one niece, Alicia Gray and husband Daniel; one nephew, Billy Wells and wife Amy, as well as several other nieces and nephews; one grandson, Byron J. Pieschel. Gary was preceded in death by his parents and two brothers, Michael Pieschel and Anthony Clark. Services will be held at 2:00 p.m. Thursday, January 18, 2018 at Ulmer Funeral Home. A Rosary Service will be held at 6:00 p.m. Wednesday, January 17, 2018 with a visitation to follow until 7:00 p.m. Burial will be at Sarcoxie Cemetery. Contributions may be made to Carthage Youth Football care of Ulmer Funeral Home. Condolences may be made at www.Ulmerfh.com. Arrangements are under the direction of Ulmer Funeral Home.

The family of Gary Joseph Pieschel Sr. created this Life Tributes page to make it easy to share your memories.