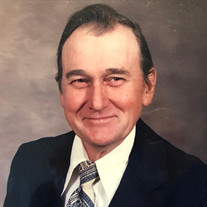 George Roy Straw, 88, joined his bride in their Heavenly home on February 8, 2019. George was born September 25, 1930 in Pipestone County, MN to Layton and Mary (Pew) Straw; he was one of six children. George joined the United States Army and served in the Korean Conflict from October 1951 to July 1953 as a sergeant with the 5th RCT in the Punch Bowl Area. He was united in marriage to Guinevere “Gay” Bussinger on September 5, 1954. They resided in Carthage on 80 acres where they raised Registered Angus cattle, numerous horses and many other animals Gay brought home. George enjoyed being in the hayfield at his house or helping a neighbor with theirs. He also enjoyed riding horses and participating in the Annual National Kidney Foundation’s Ride For Life and parking cars on horseback at numerous events with the Missouri Governor’s Mounted Guard. He was also an active member of the Jasper County Civil Defense and the First Baptist Church of Carthage. George enjoyed making people laugh and smile by telling jokes and making funny faces. He never knew a stranger, and he enjoyed helping others. He was an avid guitar player, loved a good game of dominoes and watching westerns. George is survived by one son, Michael Straw and his children Matthew and Margaret of Columbia, MO; one daughter, Bonnie Hudson (Lonnie) and their daughter Vanessa Hudson and her son Nathaniel Hudson of Carthage; two sisters, Louise Ott of Jasper and Esther Archer (K.D.) of Stotts City; one brother, Layton Straw (Emma) of Stotts City; and close friends Lonnie and Ryan Lund of Carthage, whom he claimed as family. George was preceded in death by his parents, his wife Gay, brother Albert Straw, sister Frances Roberts, daughter-in-law Melissa Straw and two brothers-in-law, Kenneth Roberts and Raymond Ott. Visitation will be held from 5:00 p.m. to 7:00 p.m. Tuesday, February 12, 2019 at Ulmer Funeral Home. Services will be held at 10:00 a.m. Wednesday, February 13, 2019 at the First Baptist Church in Carthage. Burial will be at Park Cemetery in Carthage. Online condolences may be made at www.ulmerfh.com. Arrangements are under the direction of Ulmer Funeral Home.

George Roy Straw, 88, joined his bride in their Heavenly home on February 8, 2019. George was born September 25, 1930 in Pipestone County, MN to Layton and Mary (Pew) Straw; he was one of six children. George joined the United States Army... View Obituary & Service Information

The family of George Roy Straw created this Life Tributes page to make it easy to share your memories.

George Roy Straw, 88, joined his bride in their Heavenly home...