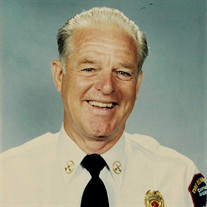 Glenn Dubry, age 83, passed away peacefully on January 20, 2021 at Freeman Hospital in Joplin, MO from complications of COVID-19. Glenn was born April 22, 1937 in Carthage, MO and lived in the Carthage area his entire life. In January 1956, he married Donna, his wife of 65 years, and had three children, Pam, Renee and Randy. Glenn joined the Carthage Fire Department in August 1965 where he enjoyed a long career and, after 34 years of service, retired as Battalion Chief in April 1999. After retiring from the fire department, he was a bus driver for the Carthage R9 School District for 12 years. Glenn loved to travel. Some of his favorite memories were of the road trips he would take his family on for summer vacation. He especially loved “out west” as he would say. He and the family spent many hours in the mountains in Washington State and on the cliff-lined beaches along the Oregon Coast. He often reminisced about those times and would say “golly those were good times.” He also liked to garden and every summer morning he could be found watering his flowers with his “best buddy” Yeller following him around the yard. Glenn was a member of the Nazarene Church for 50 years. Glenn is survived by his wife, Donna Dubry and their children: daughter and son-in-law Pam and Adam Yzaguirre, daughter and son-in-law Renee and Jim Christy, son and daughter-in-law Randy and Dana Dubry. He was a very proud PaPa to Kristopher Erwin, Amanda Smith, Danny and Emmy Drouin and Aaron Christy. He is also survived by his sister and brother-in-law Fern and Marvin Wescott, brother and sister-in-law O.T. and Sharon Brewer, brother-in-law Gary Wescott, his beloved cat Yeller and many nieces and nephews. Glenn was preceded in death by his father Orville Brewer, mother Lucille Trenary and step-father Marvin Trenary, sister Luella Wescott and brother Larry Wayne Brewer. An open visitation will be held on Monday, January 25, 2021 from 9:00 a.m. to 5:00 p.m. at Ulmer Funeral Home. Graveside services will be held on Tuesday, January 26th at 2:00 p.m. at Oakhill Cemetery in Carthage, MO. The family respectfully requests everyone wear a face mask and social distance. Online condolences may be made at www.ulmerfh.com. Arrangements are under the direction of Ulmer Funeral Home.

Glenn Dubry, age 83, passed away peacefully on January 20, 2021 at Freeman Hospital in Joplin, MO from complications of COVID-19. Glenn was born April 22, 1937 in Carthage, MO and lived in the Carthage area his entire life. In January 1956,... View Obituary & Service Information

The family of Glenn Dubry created this Life Tributes page to make it easy to share your memories.