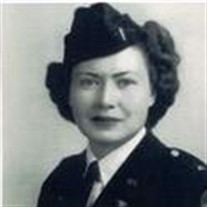 Gola B. “Fuller” Mealey, 102, passed away January 13, 2018 at Maple Tree Terrace in Carthage. Gola was born October 6, 1915 on the family farm near Halltown, Missouri to John and Bertha “White” Fuller. She graduated from Halltown High School and obtained a nursing degree from Springfield Baptist Nursing School. When World War II started, Gola was working at McCune Brooks Hospital in Carthage. She joined the Red Cross, then later enlisted in the Army Nursing Corps. Seven days after D-Day in Europe, her unit was sent to France to join the 5th Evacuation Hospital Unit where she served until the end of the war. Gola retired from St. Joseph’s Hospital in Burbank, California after 34 years of nursing. In 1947, Gola married Rex B. Mealey, Jr., who preceded her in death in 1984. Rex was a veteran of the Italy/North Africa Campaign in World War II. In addition to her parents, she is preceded in death by three brothers, one sister and one sister-in-law. Gola is survived by two brothers-in-law, Bill Westfall of Springfield, MO and Max Hamilton of Evansville, IN; a nephew, Dr. Tom Hamilton (Nancy) of Evansville, IN; a niece, Judy Anderson (Ric), a great niece, Amy Anderson, a great, nephew Andy Anderson (Britney), all of McKinney, TX; a niece, Janice McAnally (Rob), a great niece, Natalie Reasons (Brad), a great nephew, Robbie McAnally, all of Branson, MO; a nephew, Bruce Fuller of Tombstone, AZ; a cousin, Randall Fuller (Glennis) of Springfield, MO; and family friends, Robert and Janet Russow of Carthage, MO. Gola loved the Lord. She was a member of the First United Methodist Church in Carthage, Ruth Purviance Circle and the American Legion Auxiliary. Gola loved her land and her country. She was a fancier of animals, plants and all of nature. The family would like to thank Betsy and the staff at Maple Tree Terrace for the loving care that was given to Gola during her stay. A memorial service will be held at 2:00 p.m. Friday, January 19, 2018 at Ulmer Funeral Home. Online condolences may be made at www.ulmerfh.com. Arrangements are under the direction of Ulmer Funeral Home.

The family of Gola "Fuller" Mealey created this Life Tributes page to make it easy to share your memories.