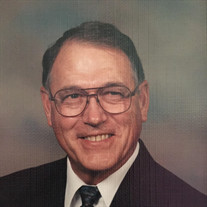 Mr. Hadley E. “Gene” Dreibelbis , 85, of Carthage, MO, passed away peacefully September 11, 2018. Gene was born in Sarcoxie, MO on November 13, 1932 to Hadley Dreibelbis and Frances Dreibelbis Strong. He was preceded in death by his loving wife Arnetha “Williams” Dreibelbis in July 2018. Gene grew up on a farm east of Sarcoxie, becoming a Christian and joining the First Baptist Church of Sarcoxie in 1948. In 1950, he graduated from Sarcoxie High School, where he met and fell in love with Arnetha Williams. They were married in 1952. As a young man, he was a farmer and held other jobs prior to moving to Olathe, KS to work on the assembly line at the Delco Battery plant. In 1971, while working, Gene attended Kansas University and graduated with a B.S. in Accounting. He enjoyed his membership in the Olathe Jaycees and served as club president. After 17 years in Olathe, he was transferred to Battery Engineering in Anderson, IN, where he worked in design for five years. The company then relocated Gene to the Delco Battery Plant in Fitzgerald, GA. During that time, Gene graduated with an MBA from Valdosta State University. After 10 years in Georgia, Gene retired as Superintendent of Quality Control in 1987. In 1988, Gene and Arnetha returned home to Missouri, where they enjoyed the life of retirement being with family and friends, volunteering, and traveling. He enjoyed woodworking, gardening, playing board and card games, and bowling. Survivors include his four children and their spouses: Linda and Jay Scrivner of Ball Ground, GA, Debra and John Duquaine of Anderson, IN, David and Shana Dreibelbis of Carthage, MO, and Donald and Anna Dreibelbis of Valdosta, GA. He was blessed with 15 grandchildren and 18 great-grandchildren. Gene is also survived by two sisters, Joyce Hodge of Kansas City, MO and Karen Williamson of Raymore, MO. Funeral services will be held Saturday, September 15, 2018 at 2:00 p.m. at the chapel of Ulmer Funeral Home in Carthage, MO. The family will receive friends at 1:00 p.m. at the chapel prior to services. Burial will be at Sarcoxie Cemetery, Sarcoxie, MO. In lieu of flowers, donations may be made to the Alzheimer’s Association in care of Ulmer Funeral Home, designating “for research”. Online condolences may be made at www.ulmerfh.com. Arrangements are under the direction of Ulmer Funeral Home.

The family of Hadley "Gene" Dreibelbis created this Life Tributes page to make it easy to share your memories.