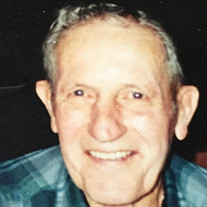 Howard “Jake” Ogden, Jr., 91, passed away June 9, 2017 at Mercy Hospital in Joplin. Jake was born May 11, 1926 in Sallisaw, Oklahoma to Howard Ogden, Sr. and Nancy “Brewer” Ogden. Jake was a lifetime resident of the Carthage Area and a self-employed carpenter. He was a World War II Navy Veteran and served in the South Pacific Battle of Okinawa. He was a 50 year member of the Church of Christ in Carthage, served as their elder and helped build their current church. Jake was united in marriage to Betty Jean "Lawson" Ogden October 19, 1946 in Independence, Kansas; she preceded him in death May 22, 1998. He was then united in marriage to Joan "Baird" Ogden in March of 1999 in Oronogo, Missouri; she survives. Jake is survived by three sons: Larry Ogden and wife Christine of Diamond, David Ogden and wife Saundra of Joplin, Terry Ogden and wife Patricia of Carthage; three step-sons: Gary Baird and wife Mary of Carthage, Tom Baird and wife Debbie of Joplin, Marvin Baird and wife Dolly of Carthage; two step-daughters: Brenda Spencer and husband Richard of Carthage, Sharon Rhine and husband David Honaker of Carthage. He is also survived by 8 grandchildren, 12 step-grandchildren, 15 great grandchildren, and 18 step-great grandchildren. Jake is preceded in death by five brothers and six sisters. Funeral services will be held at 10:00 a.m., Friday, June 16, 2017 at the Church of Christ in Carthage. Visitation will be from 6:00 p.m. to 8:00 p.m. Thursday, June 15, 2017 at the Church of Christ in Carthage. Burial will be at Park Cemetery. Contributions may be made to Fair Haven Children's Home, care of Ulmer Funeral Home. Arrangements are under the direction of Ulmer Funeral Home.

The family of Howard Ogden Jr. created this Life Tributes page to make it easy to share your memories.