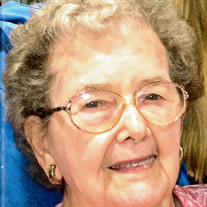 Isabel M. Johnson, 99, went to be with our Heavenly Father on Thursday, February 22, 2018. Isabel was born August 22, 1918 to Gust E. Carlson and Anna “Midtun” Carlson in Beresford, South Dakota. Isabel was united in marriage to Laurelle “Larry” A. Johnson on February 7, 1941 in Pasadena, California. In 1943, Larry and Isabel moved to Carthage where Larry was an instructor at Camp Crowder. Isabel was a homemaker all of her life, enjoying sewing, gardening and the activities of her children, grandchildren and great grandchildren. She was a life-long member of Faith Lutheran Church in Carthage and recently attended the Zion Lutheran Church in Springfield, Missouri. Isabel is survived by one son, Marvin Johnson (Pam) of Jacksonville, FL; one daughter, Barbara Cook (Greg) of Carthage; four grandchildren, Jennifer Johnson (Gary) of St. Augustine, FL, Jeremey Johnson (Kerry) of Jacksonville, FL, Brandon Cook (Alyssa) of Carthage and Megan Sloan (Zachary) of Mulberry, FL; four great grandchildren, Kate Cook, Mackinzie Cook, Amelia Johnson and Luke Johnson; sisters-in-law Isabel Carlson and Ardis Christensen, along with numerous nieces and nephews. Isabel is preceded in death by her husband, infant daughter Karen, her parents, in-laws, five brothers and one sister. Funeral services will be held at 2:00 p.m. Monday, February 26, 2018 at Ulmer Funeral Home. Visitation will be prior to the service from 12:30 p.m. to 1:30 p.m. at Ulmer Funeral Home. Burial will be at Park Cemetery. Contributions may be made to Zion Lutheran Church in care of Ulmer Funeral Home. Online condolences may be made at www.ulmerfh.com. Arrangements are under the direction of Ulmer Funeral Home.

The family of Isabel M. Johnson created this Life Tributes page to make it easy to share your memories.

Isabel M. Johnson, 99, went to be with our Heavenly Father on...