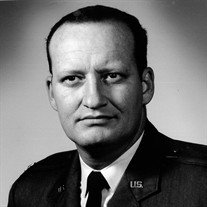 Lt. Col. (retired) Ivan LaRoy Hager (USAF) reported for duty at his eternal duty station June 11, 2018. Born on January 13, 1933 in Ft. Collins, CO, Ivan’s childhood days were spent in San Pedro, CA and Ft. Collins, CO. He grew up with his mother, Addie (Taylor), his sister Jessica (Shelley), and his brother Harvey Hager. They proceeded him in death, along with his brothers, Harold and Charles. In high school, Ivan loved planes, debate and baseball playing catcher on four Colorado state champion teams. In 1951, Ivan joined the United States Air Force and began a 21-year career. He served as a radar intercept officer and as a master navigator, flying in planes such as the F-89, RC-121, F-101 and C-130’s. While in the USAF, Ivan completed his Bachelor’s Degree in Electrical Engineering from the University of New Hampshire. He flew missions over and in Vietnam and received two distinguished flying Crosses. He retired in 1973 from the United States Air Force. Ivan married Mikell (Elliff) Hager in 1955. Together they had four children: Christi (Steve) Brietzke of Columbia, MO, Casey (Larry) Schumacher of Chattanooga TN, Miles (Sandy) Hager of Omaha, NE and Mikell Hager of Waynesville, MO. Upon retirement, Ivan worked for Schreiber Foods, then opened his World Wide Stereo store in Joplin. He was an active member of Kiwanis and the Carthage United Methodist Church (UMC). He served as a councilman in Carthage and as president and member of the Carthage Water & Electric Board. He volunteered on the board of Hospital Meals on Wheels, serving as president until just recently. Ivan also loved being the train engineer at Kiddieland in Carthage. He is survived by nine grandchildren: Matthew (Amanda) Schumacher, Nick (fiancée Ceranne) Schumacher, Nate Schumacher, Mark Schumacher, Luke (Kristie) Brietzke, Adam Brietzke, Hannah Brietzke, Samantha (Nate) Bridgeman and Caleb (Kamil) Hager. He is also survived by five great grandchildren, one niece and three nephews. A celebration of Ivan’s life will be held at the Carthage UMC at 10:00 a.m. Friday, June 22nd with inurnment following at the Missouri Veterans' Cemetery in Waynesville, Missouri at 3:00 p.m. In lieu of flowers, the family asks for donations to Carthage UMC or Carthage Kiwanis Club in care of Ulmer Funeral Home. Online condolences may be made at www.ulmerfh.com. Arrangements are under the direction of Ulmer Funeral Home.

The family of Lt. Col. Ivan LaRoy Hager created this Life Tributes page to make it easy to share your memories.